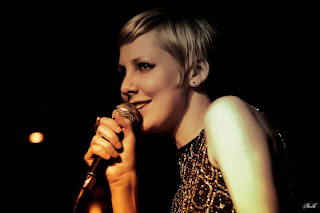 This is the second of four posts highlighting some of the bands who have entered the Glastonbury Emerging Talent Competition that we’ve been listening to in the capacity of long list judge and have found most agreeable. Once more, here’s a quick disclaimer – just because the band is featured on the blog doesn’t necessarily mean that they will be one of our final three choices to end up on the long list.

Lizzie and the Yes Men is a London based surf-pop four-piece fronted by the short cropped Lizzie (pictured above) with three young gallants named Andy, Keir and Brendan providing the music. Their riffs and twangs have a darker and edgy feel to them than you’re a-typical Hawaiian shirted, pearly smiling and bronzed tanned collection of beach dudes and sound all the better for it. However there’s still enough chirpiness in their song Broadwalk to party to, especially when they drop in some hooky whistling over the top of some snappy guitar frolics. We can imagine if Tarantino ever heard Lizzie and the Yes Men, he’d get them on his next film soundtrack sharpish. You can download Broadwalk for free below. 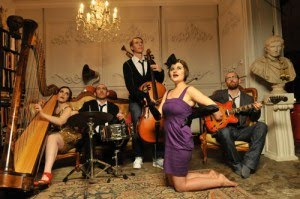 The next of the eight bands we're featuring are called Shadow Orchestra. Using cello, harp, guitar, drums, and keyboards this group take elements of ambient pop, jazz, classical and experimental electronica to produce something that may not be instantly memorable, but lilts and drifts, soothes and caresses its way along a musical journey that is tastefully subdued. They are due to release an album this spring and last year bagged a slot in the Bimble Inn stage at Breaking More Waves favourite festival, Bestival.

02 Matilda by Shadow_Orchestra
Posted by Breaking More Waves Blog at 12:01

Email ThisBlogThis!Share to TwitterShare to FacebookShare to Pinterest
Labels: Lizzie and the Yes Men, Shadow Orchestra