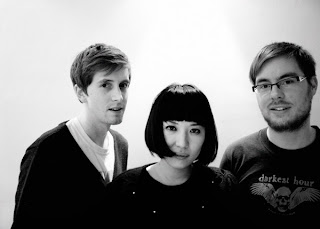 Suffused with upwardly-rising late-night beats, mellow electronics and the Bjork in a fishtank vocals of lead singer Ayu, post-dubstep trio Nedry are back with a new single Dusk Till Dawn. The track represents the first fruits of their on-going labours to create a second album, the follow up to Condors, which we featured a number of tracks from on the blog in 2009/10. We’re not sure if there’s any link to the film of similar name, but we would like to think that George Clooney would approve.

Dusk Till Dawn is dagger-trippy, both unsettling as it is beautiful, perfect for that late-night after clubbing bus ride home whilst there’s still some adrenalin pulsing through your veins.

As Nedry slowly build towards the album they’ve booked a few live slots. Catch them in London at Huw Stephens presents at The Social on March 8 or an XFM Xposure gig on March 10 at Camden Barfly. The band will also be at SXSW in Austin Texas.

Dusk Till Dawn is free to download legally from this link for the time being, until the the bands label Monotreme officially release the song on 14th March - plus the evocative dreamy video streams below.

Dusk Till Dawn from monotreme records on Vimeo.

Email ThisBlogThis!Share to TwitterShare to FacebookShare to Pinterest
Labels: Nedry