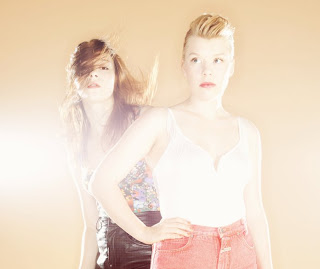 Never let it be said that Breaking More Waves is a hump ‘em and dump ‘em blog. Well, Ok, pop music being what it is there are inevitably times when we’ll get very excited about a band, shoot our load and then disappear off with someone else. But sometimes musical journeys, like relationships are full of twists and turns and now and then we end up coming back to one of those near forgotten one night stands only to find that they’ve changed, grown up a little and become musically far sexier.

Such is the case with Le Corps Mince De Francoise who in January 2009 we compared to ‘a night out on the alcopops which ends up in a neon lit basement club bouncing daftly and taunting boys,’ and then never featured them again. Two years on the Finnish trio have become just a duo, recorded an album Love and Nature which drops February 21 and released the weird but impressively infectious single Ghandi. Most importantly they’ve changed their name to LCMDF and are about to release Future Me - a cooler, less frantic electropop jam which streams below. The song retains the aspects of LCMDF that charm – the d-i-y amateurishness of the vocals, the worm-in-the-brain chorus and sense of playfulness of the music, but this time you can actually listen to the song more than a couple of times without it becoming annoying.

“Oh yeah it’s a sunny day, I feel OK, but I forgot my shades yeah,” is such a simple hook, but it works.

Welcome back LCMDF. Any chance of a second go of that one night stand, except this time maybe we’ll hang around afterwards?

Future Me (Radio Edit) by LCMDF
Posted by Breaking More Waves Blog at 00:01

Also:
“Oh yeah it’s a sunny day, I feel OK, but I forgot my shades yeah”
Wonder if the ex-third member took their 'Rayban Glasses' with her?

Think you just did :)