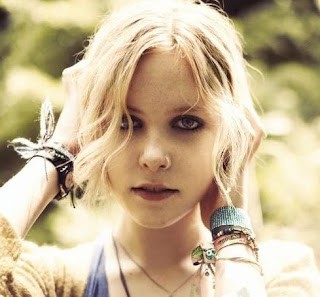 With an appearance in Vogue, a session with Radio 1’s Rob da Bank and a low key slot on the bandstand at Bestival 2010, 16 year old London-born ukulele genius and singer songwriter Misty Miller is doing all the right things to get noticed; but this would all be for nothing if she didn’t have good songs to back her up. Thankfully she does. For Misty performs the sweetest of folk songs coated with a melodic pop edge that have a hint of the early Kate Nash demo recordings such as Birds before she got all pop then angry. Misty started writing songs when she was only 8 or 9, and after receiving the ukulele as a gift from her father has proceeded to develop her sound using this instrument. Her debut EP Remember was released late September in 2010, and her next single is due in the new year.

There’s something very old fashioned about the structures of Misty Miller’s songs – Evergreen Love could quite easily have been performed by Elvis Presley and she cites influences including Billie Holiday, Bob Dylan and rockabilly music – not quite what you’re average 16 year old X Factor obsessed teenage girl is listening to. The words of her songs are however filled with the aspirations and feelings of a typical girl of her age, but are delivered with a maturity and poignancy that shows her to be a significant talent. With an album already recorded in between revision breaks for exams at school, Misty Miller is hardly likely to be competing with the One Directions and Justin Biebers of this world – and she’s all the better for it.

Email ThisBlogThis!Share to TwitterShare to FacebookShare to Pinterest
Labels: Misty Miller, Ones to Watch 2011