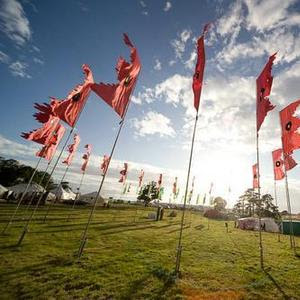 We’re pausing for breath in our posting of new music today and instead bring you news of some extra-curricular activity that we’re involved in.

Regular readers will know that some of the absolute highlights of our year are the 2, 3 or 4 days of camping, music and mayhem (and hopefully not mud) that make up the UK’s summer music festivals. There’s nothing we love more than leaving our worries behind us, making new friends and spending almost every minute of our waking hours listening and dancing in the open air to live music before crashing weary but happy back in our tent, only to do it all again the next day. Music festivals are one of the reasons we exist and this year you’ll find us at Glastonbury, Summer Sundae, End of the Road, Field Day, Bestival and Camp Bestival with one or two more still to be confirmed.

But it’s Camp Bestival that we turn our attention to, for earlier today the first part of its line-up was announced. It includes Blondie, Mark Ronson, Katy B, Clare Maguire, The Wonderstuff, Wretch 32, Breakage with Jess Mills, Eliza Doolittle, Fenech Soler and many many more…

This year we’re proud to announce that Rob da Bank - Radio 1 DJ, Sunday Best records head-honcho and organiser of Camp Bestival has asked us to get involved with the festival. Some of you may know that in 2008 we DJ’d in the Hidden Disco at Camp Bestival’s big brother Bestival under the alter ego of DJ Hojo Hits and that last year we formed a fancy dress DJ collective under the name the Sunday Best Forum All Stars and opened the festival with an incendiary set in the Big Top which got the early birds through the gates dancing in the daylight (see here).

In 2011 we’re bringing the Sunday Best Forum All Stars to Camp Bestival – Djing three early evening sets one each day in the legendary Bollywood Tent, a regular and much loved area of every single Bestival and Camp Bestival. But here’s the important bit – you could be with us DJing.

If you’re thinking of going to Camp Bestival (winner of the Best Family Festival at the 2010 UK Festival Awards) then this is your chance to not just be a punter but a performer. The Sunday Best Forum All Stars take their name from where they are created – on the Bestival and Camp Bestival forums. So, if you’re making the trip to Dorset in late July and want to be part of our DJ crew, simply sign up to the forum and follow the instructions using the link here. We’ll be picking 4 or 5 forum members to accompany us on stage for what will surely be a weekend to remember. No DJ skills are required, just an ability to pick a good tune, be prepared to wear fancy dress and to understand and embrace the eclectic, fun spirit of Camp Bestival.

If you’re the sort who likes the spittle-soaked moshpit, cheap lager and unmerciful rock n roll behaviour of the likes of Reading Festival, Camp Bestival will not be for you. However if the idea of a weekend spent in a world of good-natured fairytale utopia with eclectic music, an abundance of clean toilets, great food and entertainment for all ages appeals, then why not come to Camp Bestival ? It really is a garden of delights. Watch the film captured on Super 8 camera below by Tactful Cactus and you’ll see what we mean plus enjoy the music of a couple of the acts playing this year.

See you in a field this summer.