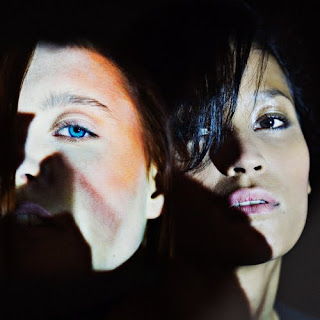 Let’s play a game. Let’s call it ‘Good Pop Bad Pop.’ Good pop is intelligent, it’s stylish, it’s cool, it’s about fantasy, but it’s still real and it’s not just sexy but actually one hundred per cent makes you want to have sex. Right now. With anyone. Good pop is more than just about good songs – it’s a concept, a lifestyle and it’s something that no matter how much it is derided by the arty / indie / hipsters will fill many more people’s lives with joy than the typical lo-fi blog band.

The UK is pretty damn good at producing good pop. We have a history that stretches back to The Beatles. But there’s another country that gives the UK a run for its money – Sweden. From Abba to the aforementioned Robyn, from The Cardigans to Lykke Li, Sweden is the pop princess waiting to usurp the queen – particularly when it comes to female vocal pop. Now here’s another example of good pop and the word is even in their name – Icona Pop.

Icona Pop is Caroline Hjelt and Aino Jawo from Stockholm, Sweden. Things we know about Icona Pop: Their favourite Catherine Deneuve movie is Dancer in the Dark (a good choice – the second best Lars Von Trier film after the brilliantly named Breaking the Waves), their favourite writer is Prince and they are addicted to Mozzarella sticks.

Previously touched by Kitsune this girl-girl duo are very much doing good pop. They’ve got girlish chanted choir choruses, bubbly computerised sounds and rhythmic elements that crash, wallop and jive in all sorts of directions. It’s inventive, colourful and very accessible. Listen to Still Don’t Know - a melee between The Go Team, Cults and Lykke Li with the hookiest schoolyard chorus you will hear this year and the squelchier, rubbery bubble-gum electronica of Manners and you’ll understand why right now there’s only one thing we want to do.

And that’s have sex.