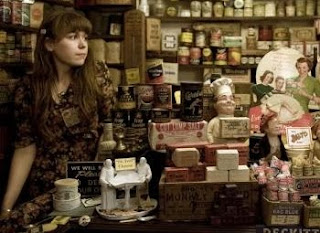 The gentle and wondrous tones of Alessi Laurent-Marke have been missing from this blog for some time, but in April Alessi’s Ark will release the follow up to Notes From The Treehouse through Bella Union with a new record called Time Travel. The twelve-track LP was recorded in Brighton's Electric Studios with Wilkommen Collective's Marcus Hamblett, and at Bryn Derwen in Wales with David Wrench who has previously recorded with Beth Orton and Bat For Lashes. As far as we are aware a Tardis was not involved. The record, like many second albums, is one that has grown from travelling and touring, often away from family and friends.

The first release from the new album is the pretty and reflective song Wire, which streams and is available for free download below. It finds Alessi a little older, a little wiser and ruminating on the nature of friendship, loneliness and how she realises that not all of her friends know her like she thought they did. As with everything Alessi does it’s tender and intimate and this time comes with the addition of a muffled brass interlude. It’s quite lovely to have her back.