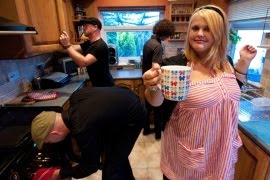 Here’s a question for you. Can you name 5 bands or artists from Portsmouth, UK who have had national or international commercial success or critical acclaim? No? Thought not. Unless you actually live there it’s probably even difficult to name a single band that has hailed from the south-central coastal city where Breaking More Waves is based. The Strange Death of Liberal England and The Cranes are probably two of the better known bands from the area, but compared with similar sized cities Portsmouth doesn’t seem to do particularly well outside of its own boundaries.

It’s probably why as much as we love our own home town, Breaking More Waves often casts its musical eye towards neighbours Brighton, a city that seems in all ways to be blessed with a far richer level of musical success and diversity. The Maccabees, Bat For Lashes, The Go Team, Blood Red Shoes, Eighties Matchbox B-Line Disaster, Fatboy Slim and Esben and the Witch are just some Brighton inhabitants that have found national and international recognition and there are plenty more bubbling under such as Rizzle Kicks, Mirrors and Kinema. The reasons for the two south-coast cities differing outputs and success levels are too complex for analysis in a short blog post but today for once we’re pleased to present some music from our home city.

Leigh Mary Stokes is a twenty year old Portsmouth based singer songwriter who has been around for a number of years now, having released her first EP back in 2009. Describing her influences as cheese on toast and a cup of tea on the balcony in the sunshine, Stokes plays jubilant sounding indie guitar pop that effervesces with a warm charm and just enough cuteness to be engaging without ever being twee. Imagine Amy MacDonald, 10,000 Maniacs, Kirtsy Macoll (R.I.P) and Kate Nash forming some sort of indie super group with a bunch of musicians who are (possibly) influenced by early noughties version 2.0 britpop / landfill indie and you’ll be reasonably close to the mark. Don’t let the references here to landfill indie put you off though – we’re not talking a female fronted Razorlight.

What sets Leigh Mary Stokes apart from many of her Portsmouth contemporaries is the ability to pen an instantly hooky and accessible pop tune that grabs you on first listen plus the obvious fact that she is female – the Portsmouth scene being over consumed by boys with beards and some of the worst haircuts in rock. It’s possibly the only city in the UK where is seems that check shirts and skinny jeans never go out of fashion.

Whatever haircut Stokes has though, and even if she had a beard, her delightful songs would always leave us feeling cheery, as they’re blessed with opulent breeziness. When It All Goes Wrong delights with melodic stomp, Day Come Day Go starts dangerously close to The Libertines Up The Bracket but restrains itself from falling into a druggy shambles and best of all, the reason why we’re finally featuring Stokes on Breaking More Waves, is her new single Your Smile. “I smoke when I drink and I drink all the time, but nothing seems to get you off my mind,” she sings, not ready to let go of her previous relationship. It’s full of youthful spirit, chirpy sincerity, girl-next-door-likeability and indie-pop melody, showing that whilst Portsmouth may not yet be ready to recast music and deliver a truly ground breaking band, there is talent there waiting to be discovered.

Leigh Mary Stokes -When It All Goes Wrong by leighmarystokes
Posted by Breaking More Waves Blog at 10:30