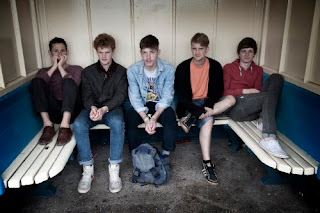 There’s something about the use of the word dog in a band name that somehow seems a little bit wrong, or should we say do(d)gy? Band names such as Dogs Die in Hot Cars and Dogs D’Amour must go down in musical history as some of the most appalling ever, and now here’s another one to join them – Dog Is Dead.

The name certainly doesn’t conjure up images of musical invention, excitement or velocity, then add to this the bands appearance – that of typical dishevelled indie kids who would rather be on the cider-spoilt floor watching bands than up on stage doing it - and things don’t bode well. But these are prejudiced judgements made without using the vital key to great music – your ears. Once you’ve put that bodily part into practice, then chances are another part of your body - your brain - will be thinking very differently.

For Dog Is Dead have ambition in their musical pop-vision. Listen and you’ll hear references running all over the sonic spectrum – from the rhythmic stop-start grooves of Local Natives to the off-kiter pop mentality of Mystery Jets, throw in some Beach Boys harmonies for a weighty measure and a pinch of Clarence Clemons 80’s sax-appeal and there ladies and gentlemen, boys and girls, you have your new favourite band of the week.

It’s not just us that think so either. Dog is Dead have already picked up coverage by the likes of the NME, have been play listed on BBC Radio 1 through BBC introducing and have picked up significant Brit-blog love from many of the movers and shakers. Soon you’ll get to hear and see new single River Jordan – an affecting mash up of Fleet Foxes multi-layered vocals, complex guitar picking and unlaundered noise on Channel 4’s Skins, where the band will follow in the footsteps of Foals and Crystal Castles and play themselves in the final episode of the current series.

Dog Is Dead are also out on tour in March at Manchester, Darlington, Nottingham, London, Bristol and Brighton where you can catch their glorious gang vocals and rammed-full-of-ideas approach. Why not make it a date?

Email ThisBlogThis!Share to TwitterShare to FacebookShare to Pinterest
Labels: Dog Is Dead