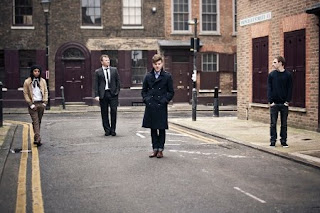 Earlier this month we brought you a new song and a new band called Kites. Next up is their video for the song we posted – Take the Reins – it was filmed by the folks from the Brit School – Film and Digital Art.

We’d like to draw to your attention several interesting facts about the film.

1. The band appear to have spent all of their money on their music because Richard Baldwin on ‘mechanics’ doesn’t seem to be able to afford a suitably tall table to put his laptop on, instead using some books to give him the extra height.

2. If guitarist Taio Renee-Lawson got off his chair and stood with his guitar as most band guitarist types do Richard Baldwin could then sit down at the table with his Apple Mac without having to risk a potential laptop wobble from the books. This would be more practical and sensible, but probably wouldn’t generate the required image that this band are a literate bunch and can actually read.

3. Except of course that just having a bunch of books under a laptop doesn’t actually show you read at all – just that you’ve got some books around the house.

4. Richard’s Mac is obviously not at eye level and therefore we would raise serious concerns as to whether the band carried out a health and safety display screen risk assessment before letting Richard perform in this way. We would conclude that they probably didn’t and therefore have put their friend / band member in risk of neck, shoulder and eye strain injury, which is not very safe and not even very rock and roll.