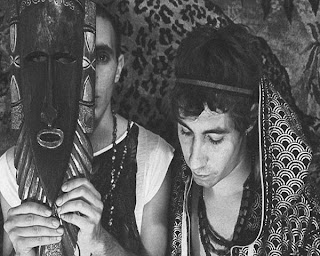 League are a London based group consisting of a couple of architecture and journalism degree drop outs who sound like the cousins of the Klaxons without the huge full-on belters, adding keyboards to guitars or guitars to keyboards, depending on your perspective. They are a band who in some quarters would be defined as indie, but this is very much the 2011 version of indie – a blurred vision of a genre that doesn’t actually mean anything anymore. Bands like The Pastels and Half Man Half Biscuit would probably turn in their graves if they heard these songs described as such.

But forget genre definitions and let’s focus on the music. You can hear catchy synth hooks, vocals out of the school of Simon Le Bon, live drums and guitar flicks that create some half decent tunes. League may be a little derivative for some and almost certainly would have fitted in better in 2007 than 2011 but a couple of listens to Golden Maps (no not Golden Skans) with its swirling electronic hooks and mellow drop-downs suggest that if you found Surfing The Void a little disappointing, League may be your decent budget replacement.

Email ThisBlogThis!Share to TwitterShare to FacebookShare to Pinterest
Labels: League

i actually wouldn't mind full on belting for this track. to me, it feels like it would benefit. i like this one. it's nice. i could hear this one circulating if somebody's playing it for me quite a bit. i wouldn't mind that, but yeah, it feels right below epic if i'm honest. just a tiny notch below.