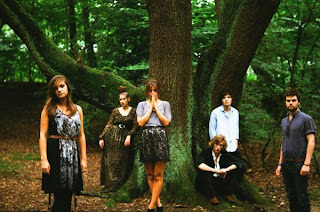 Roses are beautiful aren’t they? From the early 90’s referencing sophisticated indie of Rose Elinor-Dougall to the modern vulnerability of new country and western star Caitlin Rose, just when one lovely bloom would do, somebody gives you a whole bunch. This latest new rose is one Sophie Rose, who actually seems to be called Sophie-Rose Harper, but rather like Kylie, Madonna or Beyoncé has dropped her surname. Not that Sophie Rose is similar to any of these big pop artists – her music is more mature sounding – assuming that you define pop as being immature.

Having written songs with Ex-Lude Matt Allchin (who contributed to the song writing process on Florence and the Machine’s debut album), The Kooks drummer Paul Gerrard (but don’t hold that against her) and William Rees and Kai Fish from the Mystery Jets (who she also provided vocals for on their song Lady Grey on the album Serotonin) Sophie Rose has now assembled a band and is getting out and about with her blend of classy, slightly mainstream sound with forthcoming slots at Manchester’s In The City as well as Proud Galleries in Camden, London with more to follow. Our favourite song is the naggingly insistent You Killed Summer, which with its hooky “On and on and on,” chorus could quite easily find itself on playlists of both BBC 6 Music and Radio 2. Elsewhere the Amsterdam referencing Going Dutch is not far behind, growing like Van Gogh’s sunflower from harp and acoustic guitar into a stomping folk / pop /rock tune that is most pleasing on the ears. Sophie has also recorded a duet with the aforementioned William Rees – a gentle country lilt entitled Take Me Where the Roses Grow, which adds another rose into our growing bouquet. At this rate by Valentine’s Day we’ll have the dozen we need.

The video for an acoustic version of You Killed Summer, plus a selection of other songs stream below.

You Killed Summer (Not Mixed) by Sophie-Rose
Posted by Breaking More Waves Blog at 00:01

Email ThisBlogThis!Share to TwitterShare to FacebookShare to Pinterest
Labels: Sophie-Rose

Error corrected. Not quite sure where I got Barker from.