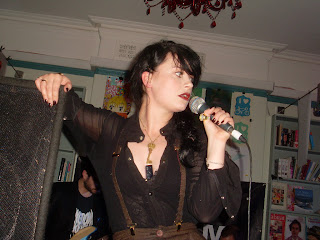 One of the ways in which In The City wins hands down against other multi gig urban festivals is in terms of ease and convenience. All of the venues are within a stone’s throw of each other and attendance numbers are such that there didn’t appear to be any queues to get into any shows, meaning that gig-hopping was incredibly simple.

A lunchtime start welcomed a Brilliant Artists Booking Agency showcase at the Night & Day Café – a venue that literally did what it said on the tin, with a total of nine bands gracing its stage during the course of the light and dark hours.

Klaus, formerly known as Klaus Says Buy The Record, was the winner of the Red Stripe Award 2008 and reached the final stages of Channel 4's Orange Unsigned Act in 2009. However it seemed that he may also be auditioning for the Comedy Awards with his in between song jokes. “I’m bored of the miners now they’re mainstream news – I preferred them when they were underground.” He did his best to alienate the small crowd watching. “This song sounds exactly like the last one.” Explaining that this was his first gig in three years without an acoustic guitar, the amplification gave the tunes warmth despite abrupt and scrappy endings.

Next up were The Woe Betides, a straightforward three piece Weezer like alt-rock-pop band who mixed live and programmed drum patterns, low slung bass and fizzy guitar riffs. Rocking it like it was 1996 all over again they were as original as Kerry Katona appearing in a gossip magazine.

With a beard and boater hat Napoleon IIIrd may have looked like he would be better hanging out with the new folk crowd, but the only tip to tradition he paid was by rustling up the quirky, free-spirited inventiveness of eccentric oddball pop. His highly engaging acid karaoke, laptop experimentation and frantic bottle hitting was nearer a psychedelic Beach Boys, Active Child gone crazy and Animal Collective all given a damn good shake up. Napoleon IIIrd was the spark that lit the fire.

The showcase finished with My First Tooth. Despite the name, twee babygrow cuteness was not the order of the day here, instead robust and joyous boy-girl county-folk hoedowns such as Orchards grabbed the audience buy the balls and led them to the drunken village barn dance for a romp in the hay. Or rather they would have done if it hadn’t been four in the afternoon and everyone was sitting drinking coffee.

Crammed into a tiny room on an even tinier stage at the back of The Castle Hotel Brown Brogues were keeping the spirit of raw primal lo-fi rock ‘n’ roll well and truly alive. With a White Stripes school of drumming technique – just two drums hit hard - and a sexy, hip wiggling, fuzz-toned singer coaxing an unholy noise from his guitar, Brown Brogues seemed to understand that an instrument is not just something to play but something to perform with – Mark Vernon thrusted his guitar up against his chin and plunged it forcefully against the amps, wrenching musical entrails from within. This was a band who didn’t give a toss about the audience being able to understand the words – all smothered in distortion and instrument abuse - this was noise sex. “This one’s for the ladies,” Vernon announced. He probably had them up against a wall later.

The sexiness continued with Sophie-Rose and her fine looking stable of men and women bringing a bunch of classy easy on the ear pop songs such as You Killed Summer and the hooky harp fuelled Going Dutch to the Mint Lounge, both of which sounded like hits in the making. Her duet Take Me Where The Roses Grow, written with Will Rees from the Mystery Jets was performed with her bass player on co-vocal duty, a shimmy of country tinged sophistication. Confident and at ease, Sophie-Rose quickly charmed with sassy songs that just scream to be heard by the masses.

From the Mint Lounge to the Ruby Lounge for Breaking More Waves favourites Let’s Buy Happiness; the best thing to come from Newcastle since Alan Shearer. Let’s Buy Happiness continue to grow in confidence with every show they play – lead singer Sarah appeared a little punk rock dressed in denim shorts and ripped tights, but their shimmering textured guitar songs are more celestial than aggressively energised. Recently Guardian journalist Paul Lester called into question Sean Adams of Drowned in Sound website and his description of the band as ‘thrilling’, but Lester missed the point. A band doesn’t have to have a manic energy to set the pulses racing. With Sarah’s gorgeous ethereal vocal and the bands complex tight knit music, Let’s Buy Happiness are utterly thrilling. No question.

“Are you in love?” questioned performance pop chanteuse Smatka (pictured) to a member of the audience in the Soup Kitchen. “That’s beautiful,” she acknowledged when the reply was affirmative. Like a vaguely gothic Cyndi Lauper and Siouxsie Soux, watching Smatka is like being served by a flirty bold eastern European in Lidl. During her show she was the dark priestess in command thwacking two drums either side of her, saucily doubling backwards on her knees and climbing onto a chair off stage, propping herself against the speaker. Visually Smatka is the real deal, and her epic pop structures showed plenty of potential. One to watch. 100%.

The evening finished with Breaking More Waves recently approved electronic pop newbies Labyrinth Ear. With electronic maestro Tom looking like James Yuill’s long lost darker brother and hooded and robed pale-faced singer Emily coaxing out her timid but tender vocal, the boy-girl duo appeared somewhat nervous for what was their first ever show. However their blissfully romantic electro pop was a cool understated pleasure, and given more confidence they could soon be lighting up more than just a handful of music blogs.