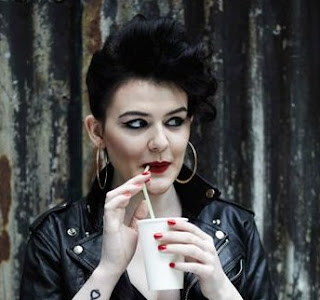 “Pop is dead,” Radiohead once sang. In a commercial sense they couldn’t have been further from the truth. The BBC reported earlier this year that rock sales continue to decline, with only a handful of bands such as Kings of Leon making waves in the UK charts. Of course sales aren’t everything; creatively rock is still very much alive, finding new ways to explore itself in the underground. But for now pop rules the radio as well as the majority of hearts that buy records. The question “Where’s the rock music?” was asked earlier this year on this blog (here) and in a commercial sense the answer still isn’t clear.

So here’s another pop princess. One with a bit of street attitude, a bit of class and a bit of soul - her name is Spark. If you’ve been paying attention you’ll see that we’ve been featured her a number of times on the blog since June.

Revolving is the follow up to Spark’s debut single Shut Out The Moon through pop boutique label Neon Gold. With Revolving it seems that the Walthamstow lass is moving off the single lane carriageway and onto the motorway with her foot pressed firmly on accelerate. This is an immaculately produced, solid, yet slightly quirky piece of mid-tempo pop. With its nagging oh-oh’s and what sounds like a helicopter taking off buried within the mix, it seems that now is the time for proper lift off and flight for Spark.

The single is released on 15th November. Spark plays a number of gigs this autumn including an NME Radar gig at Manchester's In The City before she heads out on tour with X Factor girl Diana Vickers. As Spark would say herself, “boom.” Revolving streams below for your pleasure. Long live pop.

Email ThisBlogThis!Share to TwitterShare to FacebookShare to Pinterest
Labels: Spark