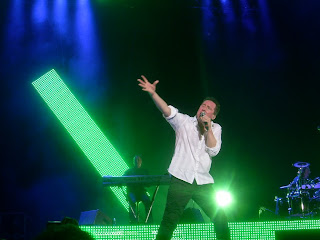 With the renaissance of 80’s influenced electronic pop music over the last few years, one name seems to have been referenced above all others – that of Orchestral Manoeuvres in the Dark. So now seems an opportune moment for the original synth pop duo to be releasing a new album – History of Modern – and taking it out on the road.

With the band being recognised as a keyboard act the first few seconds of this show are surprising in that a grunge-like, guttural guitar sound announces the arrival of the group as they charge into New Babies : New Toys. However, from thereon in things are exactly as you would expect. It’s a crowd pleasing, hit laden show with a number of songs from the new record. Main vocalist Andy McCluskey is an energetically impressive showman, prancing, pulling shapes, rock star poses and playing air keyboard with his hands like a brilliantly drunk uncle at a wedding, willing the crowd to join in at every opportunity – which they do. Paul Humphreys meanwhile is more composed, both behind the keyboard and when he takes his turn at the front to perform vocals on Forever Live and Die – whereupon someone from the audience throws a rather sizeable bra onto the stage, much to the duo’s amusement. No longer a spring chicken it’s noticeable that McCluskey's physical work takes its toll; covered in sweat he has to sit down on one of the monitors during Talking Loud and Clear to catch his breath, but to give credit his effort is huge.

Being the first night of the tour, there are a few technical hitches – the screens behind the group not displaying all the visuals that they were meant to, but nobody except the band seems to care. This is pop music that means something to people. Brighton Dome resembles the video for Queen’s Radio Ga Ga - hands clapping in unison - during the weighty and beautifully restrained Maid of Orleans. Current electronic pop connoisseurs Hurts would kill for a song like this. New single Sister Marie Says is trademark OMD, full of melody and hooky danceable keyboard riffs, whilst the title track from the new album has a middle section that bears a remarkable similarity to the vocal melody of Ring the Bells by James. During So In Love the band pull out the classic 80’s sax solo and somehow pull it off without it seeming cheesy. But it’s left to Enola Gay and the closing Electricity to inspire the maddest moments of dancing from the audience. OMD sound as fine now as they did back in the day.

Footnote : If you're a fan of OMD why not treat yourself to a free download of their new single Sister Marie Says remixed by electro-disco new boys Monarchy, which you can find on the player below, just click the little downward arrow.

Email ThisBlogThis!Share to TwitterShare to FacebookShare to Pinterest
Labels: OMD