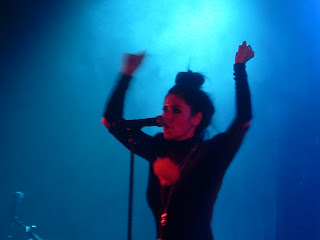 “Welcome to the family jewels,” crooned Marina Diamandis in the darkness against a background of plain piano chords on the opening song of the opening night of her Burger Queen tour at Portsmouth Pyramids – probably the only concert arena to have a wave machine and dragon slide splash zone.

The last time Marina was in Portsmouth everything ended in tears (see here) but thankfully with this show Marina was in fine health, belting out songs from her debut LP with a gutsy theatricality. Marina has always been a strong performer, but with a bigger stage and the confidence of a year of gigs under her belt, she took her showmanship to the next level. Costume changes a plenty, ticker tape explosions, balloons and a fearless stage presence – that’s before the songs have even been taken into consideration – and they were pop stimulants of A+ class.

Shampain was an uplifting Pat Benatar-esque romp, Guilty a haunting piano lament that transcended into something Mount Everest-epic and new song Jealousy showed that the hits are likely to keep coming. “Is there anybody who can help me feel better?” Marina asked after explaining how she hated the feeling of jealousy. Unsurprisingly there was a significant show of arms in the air. By the time she encored with Hollywood holding a huge plastic burger in each hand, it wasn’t only fast-food that she had in her palms – the audience were eating out of them as well. “We’ll be back next year,” she gleefully announced at the end. Portsmouth will be looking forward to it.