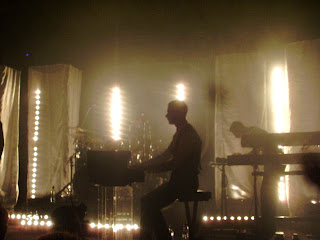 There’s a certain irony that whilst millions gawp at their TV screens, getting their only fix of weekly music from the X-Factor, Britain’s best new voice is treading the boards away from eyes of the masses. Clare Maguire may currently only be the support act to melodramatic electronic pop duo Hurts in a 550 capacity club on Brighton seafront, but on the evidence of this performance it won’t be long before she’s headlining much bigger venues.

Garbed in red tassels, flowery headdress and long boots Maguire looks like some scary sexy sorceress about to cast her spell. Backed by a slick four piece band in black jackets and ties she stares moodily at the crowd before flinging her arms wide open and opening her mouth. That’s when the power hits. Huge, soulful and potently expressive her voice booms across the space; Maguire makes the likes of Florence and the Machine seem weedy. Forget the leftfield coolness that the recent Breakage remix of her debut single Ain’t Nobody implies, Maguire has the potential to appeal to the widest of audiences. Last Dance is a crampons breaking mountainous pop song, whilst Life After Dark with its rave like synths and heavy bruising drums is epic in its proportions. Her cover of Fleetwood Mac’s Big Love is delivered with unnerving confidence, her vocal presence taking full ownership of the song. “The best support act I’ve ever seen,” one member of the audience is overheard saying. He could well be right. Absolutely incredible.

It’s been a slow build for Hurts (the static Chris Lowe like Adam pictured) in 2010, taking some time to establish their true audience, but with a sold out tour and their debut album Happiness being the fastest selling debut by a British band this year, the Hurts trajectory is veering upwards. Whilst Hurts may very much be a pop band, their world is not one of neon technicolour - Hurts find glory in greyness. “It’s a beautiful rainy day,” singer Theo states with a sense of satisfaction to the audience. Yet despite their monochrome outlook their music is anything but grey. Hurts bring a gravitas and lavishness to pop music in every aspect of their detail. Collars and cuffs, stern motionless opera singers, atmospheric back lighting, composed stage presence – everything Hurts do is thought out and calculated, but it never seems cold. There’s a sense of humour in their personalities, even if they are very serious about the music, evidence of which is displayed when Theo mocks at their suits – “It’s hot isn’t it? I should have worn my shorts and T shirt.”

The music of Hurts is grandly magnificent – the likes of the boy band cool Blood Tears and Gold eliciting screams from girls (and a few boys) in its quiet moments, whilst Stay has the same Christmas number 1 potential as the East 17 song of the same name. “We say goodbye in the pouring rain and I break down as you walk away” is the most obvious sad Hollywood movie lyric ever, but for anyone who understands loss and its part in pop music, goose bumps will also be present. The group also tip their hats to Kylie Minogue, covering Confide In Me following her recent Radio 1 Live Lounge version of their own hit Wonderful Life. Ending with Better Than Love – electronic uplifting stadium pop at its best, they leave with no return - despite calls for an encore. Emotional pop music of the highest order.