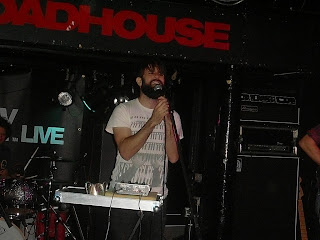 Tell anyone that you’ve been to a multi band event or festival and the inevitable question you will be asked is this. “Who was the best?” It’s a question we hate because, like a long term relationship, we prefer to consider the sum of the parts rather than individual moments. The overall consensus from those attending In The City seemed to be that after being out in the wastelands, the 2010 event was fresh, focussed, re-energised and had re-established itself on the map. However, in order to explain why In The City was very good, to get the sum of the parts, it is necessary to review the elements that make up the whole.

We recently suggested that Clock Opera are never likely to write another song as good as Once and For All. On the basis of their In The City show we were wrong. Their last two numbers, the cataclysmic Lesson Number 7 and another tune of unknown title that started as a gentle electronic hymn and then grew into a snarling tempestuous beast were incredible. Lead singer Guy Connelly, dressed in a t-shirt emblazoned with keyboards, sang with leg trembling passion. The rhythmic digits of Piece of String were punctuated with the whole band bashing cans, jugs and other random implements to create an exciting crashing rhythm - it was no surprise to find that they were greeted with a loud cheer by the Roadhouse crowd, who included producer and potential pop king Starsmith. On the basis of the set, when Clock Opera get an album out, it could be a contender for a Mercury prize nomination – intelligent, interesting and unique.

Worship may be less original – there’s an obvious Radiohead comparison to be made, but their clattering drums, moody soundscapes and haunting beats which are defined on Collateral and song Three Wolves are still worthy of attention. Despite the bands surly atmospheric dark technoid-indie-rock sound there was a moment of humour in the set. “How are you?” their lead singer questioned. “How are you?” replied a member of the audience. The singer replied that he was a bit tired – it was a long way from their hometown of Reading. “Stop moaning,” someone else shouted. “I’m not moaning, he asked,” was the response, which raised a small ripple of laughter.

Over in the Mint Lounge Bright Light Bright Light did their very musical best to get cool music industry types dancing. Everyone one of Rod Thomas’s songs was filled with 90’s influenced synth pop joy. He’d probably hate us for saying it but D:Ream sprang to mind. Disco Moment with its Moroder throb and anthemic chorus and the soaring dance floor friendly Cry At Films were screaming for a handbag to shimmy round, bottle of WKD in hand.

A quick run through a couple of rainy, boozy streets found a small crowd watching starlet in the making Spark. In a past review we criticised the lack of emotional impact of Sparks songs, but there’s no doubt that her super confident strutting and striding pop works. Like Marina and the Diamonds raised on a diet of Rhianna, Spark owned the stage, prowling like a caged tiger. “This is a masterpiece,” she belted out. Although masterpiece may be an over exaggeration, she certainly knows how to perform a good pop song.

We first wrote about Glasser back in February 2010 and since then have noticed gradually increasing coverage, particularly on the blogs, about this mystical U.S performer. Glasser was like the new Enya it’s OK to like, or Clannad on dance pills, ghoulishly prowling the dry ice filled stage like a witchdoctor conjuring a spell, as tribal drums and icy Fever Ray styled electronic rhythms floated and ebbed through the room, gradually drawing people in to her lair. There was no in between song banter, just a precise execution of vibey music. Expect her slow build rise to continue.

Our final act of the day was Manchester’s Dutch Uncles. Despite taking the stage to big cheers from a now (drunken?) up for it crowd, and blazing through a fast paced set that included opener Face In, Fragrant and The Ink, the band seemed to have little of the class of any of the other bands seen that evening. Seen it all before writhing indie math pop got the better of us and sent us home to bed, after what had, as a sum of the parts, been an excellent In The City.