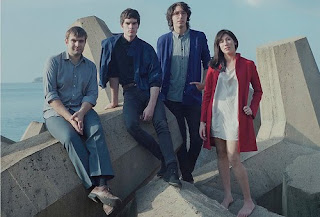 Cloud Control are probably not a band that should be featuring under the title New Waves, as this Australian quartet has been kicking round for a number of years in their homeland. Whilst the internet is global, Breaking More Waves is very much a British blog – and it’s only now that the band is readying itself for a full Brit attack. The group inked a deal with Infectious records a few months back (home of fellow Antipodean’s The Temper Trap and U.S. alt folk/rock rhythmic masters Local Natives) and will soon be releasing their debut UK single Meditation Song #2 on November 22. It’s a wonderful psych-folk workout full of cartoon chanting reminiscent of Dave Newman’s top ten seventies hit The Lion Sleeps Tonight which was given a camp chart conquering makeover in the eighties by Tight Fit with its famous “wimoweh wimoweh” hook, although this time the line is “wayohway wayohway”. Hear it once and it’s buried in the brain.

That’s not to say that Cloud Control sound anything like Dave Newman or Tight Fit. If you want comparisons then we would suggest that the previously mentioned Local Natives would be the best, sharing similarities in terms of outlandish vocal harmonies and organic experimentation – they’re also out on tour with them in the UK this winter following the small bunch of dates they played back in July.

The bands album Bliss Release, due for March arrival in the UK has already done exceptionally well in their own country, having picked up 2 Jagermeister Independent Music Awards for Best Independent Album category as well as Breakthrough Independent Artist. They’ve also been nominated for two ARIA awards, for Best Rock Album and Breakthrough Artist. Weathered with uplifting hooks, clapped rhythms and a keen collection of acoustic and rock guitar work, Cloud Control will banish the rain and give rise to a summery spring in the step of the UK soon. We’ll be catching the band in our home town of Portsmouth when they touch down in November, so expect us to bring more of them to you then.

Meditation Song #2 (Why, Oh Why) by Cloud Control by infectiousmusicuk
Posted by Breaking More Waves Blog at 00:01

wow, this sort of remeinded me of The Mamas and the Popas, but way more psychedelic. Love the guitar tone and the harmonies. good stuff :)