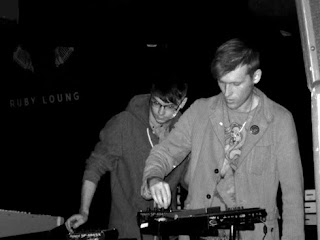 After any multi band event, particularly one which showcases new music for industry types, there’s inevitably going to be a swirling whirlpool buzz around a handful of bands, ready to suck them in. This is the case with Manchester’s D/R/U/G/S, a male duo who we caught here at their hometown jaunt of In the City last week, one of a number of well received shows they played. The deal is that D/R/U/G/S wholly deserve the attention they’re getting. D/R/U/G/S conjure up the kind of interstellar spacey electronic dance music that Orbital might have been making if they were still a youthful going concern. It’s good enough to work on the dance floors but just as importantly it’s highly listenable at home. Thumping stomach churning beats and ambient soundscapes that owe a gentle nod to the Witch House movement are the order of the day, putting D/R/U/G/S in a very of the moment place.

Having delivered some damn fine remixes for Egyptian Hip Hop and Crystal Fighters (below) D/R/U/G/S are doing all the right things to get noticed, most importantly by creating incredibly absorbing electronic music. They play a number of shows over the next few months straddling themselves between their hometown and London.

Email ThisBlogThis!Share to TwitterShare to FacebookShare to Pinterest
Labels: D/R/U/G/S