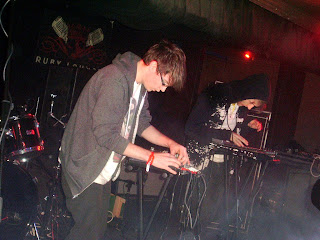 “That that don’t kill me can only make me stronger,” is the slogan that greets visitors to this years In The City website – a positive message for a music industry whose traditions are being attacked from all sides. The internet revolution may not have killed the industry, but it certainly has given a good kicking to certain sectors.

Yet whatever the state the industry is in, artists continue to create – and once industry types are away from the daily conferences and keynote speeches that form the daily backbone of this event that has been running in Manchester since 1992, they can immerse themselves in that creation alongside the public at a number of live gigs and showcases that run into the night. In some quarters In The City has a reputation for being populated by industry types more interested in where their next line of coke is coming from than music, but day one saw no evidence of this – only people who are passionate about music were in attendance; maybe recession and the wireless web attempted knockout have been beneficial in slimming down and focussing the industry on what it should be concentrating on, or maybe it was just the events repositioning in the market as a more public event similar to its now bigger cousins such as Great Escape in Brighton and Camden Crawl in London.

In the past In The City has always been heralded as an opportunity to discover new and unsigned music. However as this year’s programme acknowledges, “the phrase ‘unsigned’ is becoming less and less of an issue in the mind of today’s bands, fans and the industry.” In 2010 the possibility of random discovery is much less, with the advance opportunities via blogs, websites and aggregators such as Hype Machine to find out about up and coming artists. Now In The City is more about showcasing these bands that the internet has been buzzing with than pushing something completely new into your face. To use that old cliché – you can’t beat the live experience

There are a variety of approaches to take with multi-gig multi venue urban festivals. You can zigzag between venues with a programmed or haphazard agenda of bands to see or you can take a more sedate approach and remain in one venue consuming whatever is served. Day one saw Breaking More Waves firmly ensconce itself in The Ruby Lounge, for a varied and sometimes intense evening.

It must be somewhat dispiriting to play to less than twenty people in a near four hundred capacity venue but that is the fate that befell the two girls one boy three piece Pocketknife. Coming on like a kindergarten Hole or early PJ Harvey their throaty, rasping, smashed glass vocals, guttural guitar and bass messily grunged the night up a bit. Brody Dalle would have probably enjoyed herself.

A hype laden geek-lad knob twiddling electronica duo with a pretentious band name does not on paper inspire confidence but with their chest thumping bass beats and cohesive, intelligent compositions that recall the blissed out spirit of rave, D/R/U/G/S (pictured) were mesmerizing. Every time they triggered a sample their hands shot back as if hit by an electric shock, the music chiming throughout the filling venue. Believe the hype, and take some D/R/U/G/S. As their Myspace suggests, drugs do good things.

Three piece Factory Floor bombarded the audience with Post-industrial hypnotic electronic pulses, layered with snatches of ghostly reverb laden vocal, live drumming, noises wrenched from guitar with a bow and an unsettling loudness. Their throbbing uneasy Moroder intensity seemed to want to destroy the sound system as well as heads. They finished their set in total darkness, their nightmare dance sound having created both pleasure and pain at the same time.

The darkness continued with O Children. Graveyard vocals and guitar noise set them firmly in the Sisters of Mercy meets Joy Division meets Interpol camp, yet the songs they played never ascended to those lofty heights in terms of songcraft. Lead singer Tobi’s vocal had resonance with its weight, but for now they remain as a band with potential rather than one to yet become vastly excited about.

It was left to Still Corners to bring the remaining members of the audience out of the gloom. Like a rainy autumnal Thursday or a sixties film-noir Parisian café, Still Corners created a beautiful, ethereal soundtrack. They washed away the dirt with a dreamy slow motion wipe constructed out of intricate guitar work, swirling organ and the sighing tender caress of singer Tessa, who produced a floating in fog vocal, coaxing the audience deep inside, to be lost in its haze. Still Corners set was the perfect comedown – intoxicatingly sleepy, in the best possible way.