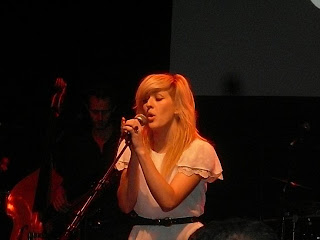 Singer Kirsty MacColl died tragically in December 2000 when she was struck by a motor cruiser after surfacing from a scuba dive with her sons Jamie and Louis off the Mexican coral island of Cozumel.

Marking the 10th anniversary of her death on what would have been her fifty first birthday, fans and friends joined together to participate in a special sold out tribute concert at London’s Shepherds Bush Empire and help raise money for one of Kirtsy’s favourite causes. Billy Bragg, Ellie Goulding, Catherine Tate, Alison Moyet, Kim Wilde and Andrea Corr were just some of the star performers involved. Profits from the event were donated to The Music Fund for Cuba, which was established in 2001 in memory of the singer, whose last album was inspired by the Caribbean island.

“High end karaoke,” is how compere and comedian Phil Jupitus described the gig in jest, but the reality was much more how Kirsty’s mother described the show in a moving, if somewhat rambling speech towards the end of the night ; an evening of musical theatre. Each performer was part of the cast, taking their turn to perform their act with a highly accomplished band of backing musicians. The only disappointment for some punters was the non-appearance of several billed singers, namely Shane MacGowan, David Gray, Clare Maguire and Johnny Marr, who Jupitus explained was “with The Cribs – they’re like evil twins.”

The highlights however were many. Despite a solemn start with Omar Puente performing a piece he composed for the scattering of MacColl’s ashes over the sea, the pace soon livened into a more sweet than bitter evening of musicianship, played by artists who appeared to genuinely care and were present because of their love of the music. From Eddi Reader’s tropical take on Mambo de la Luna to Billy Bragg bringing the house down with his euphoric cover of a song he wrote – New England – despite having, as he put it “a cheryl cold.” This was a celebration of Kirsty MacColl’s life and music, and even for non MacColl obsessives there was enough variety and talent to ensure there was something for everyone. Ellie Goulding (pictured) cut out her acrobatic vocal warbling to produce a subtle and restrained version of Soho Square, Amy MacDonald appeared to delight in producing a sterling version of Fairytale of New York with the bands drummer taking the male vocal in the absence of MacGowan, looking like a reject from Mumford & Sons James Walsh the ex-Starsailor man covered All I Ever Wanted and Andrea Corr made a few dads weak at the knees as she charmed her way through They Don’t Know. But best of all was Alison Moyet. Looking in better condition than she did 25 years ago, her deep soulful voice caressed Head with warm sublimity before treating the audience to a riffed-up groove of Walking Down Madison, supplemented with punch-electric sounding brass.

The evening finished with MacColl’s debut single There’s A Guy Works Down The Chip Shop Swears He’s Elvis with Phil Jupitus delivering a half-decent attempt at a vocal together with an ensemble of all the performers. Maybe this was high end karaoke, but it was also a huge reminder that MacColl was a fantastic songwriter; her early death a loss to lovers of music worldwide.