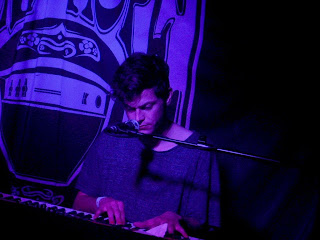 Watching Perfume Genius play live is like uncomfortable voyeurism in silence. Brighton’s Hope is so quiet that when a member of the bar staff rattles an ice bucket during a song it breaks the hushed, respectful stillness with a jolt. This is a gig that feels like you really shouldn’t be watching, really shouldn’t be listening, it’s so brilliantly intimate and direct in its delivery.

Mike Hadreas cuts a gaunt, almost ill looking figure at his keyboard. His face twitches and contorts awkwardly and emotionally. During his first song he has to pause halfway through to cough limply, which he describes as a “murder ballad burp.” Set five feet aside from him is a monastic looking backing singer and keyboard player who stares at Hadreas like a doleful puppy unaware that anyone else is in the room; it’s either true love or admiration.

Sparse piano arrangements and the tremulous cracked vocals create an atmosphere akin to a creepy lullaby soundtrack; it’s incredible, heart in the mouth stuff that leaves you feeling sad and raw - but in a very good way. The lyrics are fragile and confessional and are almost too uncomfortable to take in, such as the high school suicide drama of Mr Peterson – “He let me smoke weed in his truck, if I could convince him I loved him enough,” Hadreas warbles before adding “He made me a tape of Joy Division, he told there was a part of him missing, when I was sixteen, he jumped off a building.” If the audience was naked it’s a guarantee that you would see goose bumps over every single body.

This may be an upstairs room in a pub where outside on the street boozy lads and hen nights menace the night, but Perfume Genius creates a place so different to this. Awkwardly mesmerising and very special – one of our favourite gigs of the year.