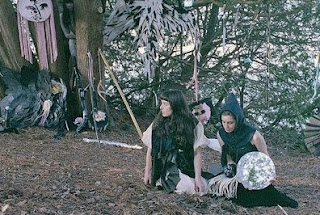 Do you love playing musical family trees? Joining the dots as bands split, former members reform and new personnel from other groups join, only for these bands to break-up later and do it all over again? “So where did you guys first meet and get together?” can often lead to rather convoluted answers for many groups. The answer to this question, if you were to ask it of Tasseomancy, gives an even stranger response – in the womb. Yet even although these two twin sisters have spent their lifetime together their history as a group is not straightforward.

Cut back to March 2010 and you’ll find a piece on Breaking More Waves concerning a Canadian band called Ghost Bees. They also consisted of two twins and had in 2008 released a mini album called Tasseomancy. This of course is no coincidence for Tasseomancy are the same Romi and Sari Lightman, re-branded or re-banded using their old albums name, marking the progression of their music influences which includes ancestry, death ritual and mythology. It’s certainly more intriguing than The Kooks who recently have announced that they wanted their new album ‘to sound more modern’ and decided that the way to do this was ‘to use synthesisers’. Yes that’s synthesisers – those instruments that have been around since the 1970’s.

So whilst the masses are being inspired (or not as the case may be) by the Kooks, we’re happier celebrating Tasseomancy who have a new album entitled Ulalume (quite possibly named after the Edgar Allan Poe poem about the narrator's loss of a beautiful woman due to her death) due on August 29 through Turf Records. Soft Feet is the first single, it in no way sounds modern. Maybe in two years time you can expect to see their next project taking Ulalume for its name, and maybe the Kooks will have split up with no hint of reforming are renaming themselves, allowing us to throw their musical family tree in the bin.

In between Ghost Bees and Tasseomancy Romi and Sara have also formed an integral part of Austra, acting as backing singers and dancers during live shows, which helps expand the musical family tree a little more. It’s probably also worth mentioning their connections to Timbre Timbre here, who they have toured with in the past and who features on Ulalume.

Enough of the histories though, let’s listen to some music. Tasseomancy and Soft Feet sits comfortably alongside the darkly-tinged folk sounds of the Smoke Fairies, their sounds being all wrapped up in heavy mysticism from another distant age. It’s an acquired but awfully good taste. They play a one-off UK show at Dalston Roof Gardens, London on June 27.

Soft Feet is such a beautiful song, and I am really looking forward to Tasseomancy's upcoming album.

It's really interesting reading about how the duo changed their name from Ghost Bees, and I agree with the similarity to the Smoke Fairies - a group that I would most liken Tasseomancy to in the current musical climate.