In Defence of Pop 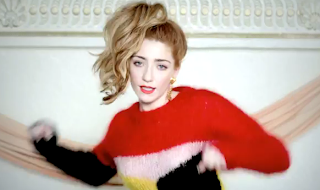 Last week we started tweeting with gushing excitement about Nicola Roberts - you know her - the pale, skinny ginger one from Girls Aloud. It was all because of her debut solo single Beat Of My Drum, a song that we claimed in a previous blog posting was an edgy and choppy mix of Daphne & Celeste, Diplo and CSS (there was a big slab of Justice in there as well). We’ve been playing it virtually non-stop all week. It’s that good. No, it’s that A.M.A.Z.I.N.G.

Since we started hyperventilating our praises we’ve lost a number of followers on twitter (which may of course be unrelated and be more to do with a number of porn / hot lady 'bots' that seemed to have decided to follow us for a few days and then unfollowed when we didn't respond to their hot lovin' come-ons) and also received a couple of emails /comments from so called ‘music fans’ who infer that by loving Beat Of My Drum we’ve somehow sold our sold to the devil and lost any credibility we once possessed – that somehow as a music blogger you’re not allowed to like pop music because it shows an inherent lack of taste and intelligence. That somehow pop is evil. Of course, we disagree. Just because we may have different taste to those who don’t like Nicola’s beat laden boomer, doesn’t make our taste better or worse – good and bad music is after all a matter of subjective opinion.

The arguments that haters put forward are often that pop music is ‘not real music’ and those who make it are false, untalented and doing it for ‘the wrong reasons’. Generally when people mean ‘the wrong reasons’ they mean ‘not the same reasons as what I believe are the right reasons’, yet as far as we are aware there is no rulebook for music. If there was then everything would sound the same, everything would look the same and life would be utterly boring – like having sex with the same partner, in the same place, at the same time in the same position once a week for the rest of your life. That might be fine for some, but we suspect that the majority of people want far more than that.

It’s the ethos of the indie elite – they construct in their heads a set of rules about the ‘right’ and ‘wrong’ ways that music should be presented, played and performed and judge all other music within these constructs. What is ‘cool’ and what isn’t become over important. We’ve been (and no doubt at some point will be again) guilty of this way of thinking ourselves – we suspect everyone is from time to time, but ultimately this intellectual prejudice puts up barriers to the most important aspect of enjoying music – emotion.

It’s emotion – the way a song grabs you and makes you want to dance, sing, laugh, cry or f*ck that is the biggest power punch that music can provide. Every time we hear Beat of My Drum it makes us feel stupidly happy. We don’t need to over analyse it, decide if it sits on any barometer of cool or not or visit a musical psychiatrist – we just accept the emotion and celebrate it. Yes of course it’s ‘manufactured’, of course it was all made on a computer, of course Nicola’s role in the song may not have been quite as involved as when the likes of the Fleet Foxes got in a studio together – but that’s not going to stop us enjoying this brilliant, edgy, unadultered pop song.

As we said in a previous post – deal with it.

A good old B.M.Waves opinon piece complete with plenty of built in sex.Always my favourite posts of yours Robin x

Of course there is the opposite of the indie scenster, that is the Pop snob. Usually found ejaculating over the latest manufactured two minute wonder over on Pop Justice purely because it's 'pop'. Their love of said 'pop' is worn like a badge of honour as if to suggest this makes them far more open minded than the indie kids. And of course that attitude is just as elitist and snotty as the worst angst ridden indie kid.

Personally I have my own likes and dislikes which cover music from all genres, there's good and bad on all sides.

For example Brother is complete and utter soul withering tripe. On the other hand I think Ga-Ga is a pulsating pustle of posionous predictible poppycock, a record label focus group made flesh and trussed up in a body stocking.

However I think liking what we like because we like it is the best reason for um, liking it!

On Nicola Roberts, I am no fan,it reminds me of being poked repeatedly in the ear with a pointy stick. But I have no problems with people liking it, just as they should have none with me thinking it makes Victoria Beckham and Dane Bowers respective musical careers seem like the work of a underappricated geniuses.

Von Pip - Yep, if we all agreed on everything it really would be dull, and you're right there are 100% pop snobs as well.

Re: Brother - does anyone actually like them ? I've yet to meet anyone. I guess there's one thing about them though, they do elicit an emotion in me - its just that emotion could lead to my arrest for the violent actions they could lead to.

I think this is the only postive review I've seen. http://www.the-fly.co.uk/words/reviews/live-reviews/9458/live-review:-brother

It's always interesting to me the way different people who wouldn't usually enjoy pop music explain or justify why they like a particular song and I agree with you about emotion.