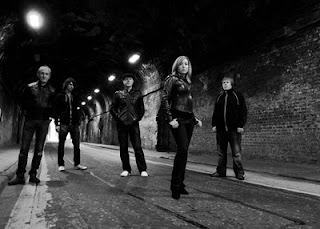 Later this week 190,000 people will converge on a working farm in Somerset for the biggest music festival of them all – Glastonbury. You can read our preview / tips for the festival tomorrow. Whilst the masses will be enjoying giants such as U2 and Coldplay, Glastonbury also plays host to a huge number of lesser known artists, some of whom may be hoping for the festival to be a step on the career ladder to greater public awareness, whilst others perform with no major plan other than to play together. Deep Cut is one such band who adopt the latter approach. “This is all about being creative and making music that resonates with us and others, rather than chasing some elusive notion of fame. It’s about making music that we are proud of, rather than something that fits into a scene,” their songwriter and guitarist Mat Flint states.

Whilst we’re featuring Deep Cut as a new wave, they’ve actually been around for a number of years. The band formed in East London in 2006, following the break-up of Mat’s previous band Revolver. For a short while Revolver were NME and Melody Maker darlings, lumped in by the press with Slowdive and Chapterhouse to create some sort of shoegaze scene, but they never had any long term commercial success and were quickly dumped by the industry. It probably explains a lot about Mat’s comment about not chasing fame.

Deep Cut is very much a family affair; with Mat’s wife Emma on vocals and his brother Simon on bass. They have already released My Thoughts Light Fires, their debut album and have a follow up Disorientation ready to go in September. The band’s sound is a trashy yet classic mix of indie guitar with female vocal melodies all struck with an essence of harmonic psychedelic pop that references bands such as Sonic Youth, The Primitives, Husker Du, The Joy Formidable, Lush and The Byrds. If Creation Records were still a going concern we could imagine them fitting very neatly on their roster alongside Teenage Fanclub, Ride and The Boo Radleys. Whilst Deep Cut is never going to be fighting with U2 for top of the bill, their abrasive tunes slash their way through the air very sweetly indeed. If you're at Glastonbury why not make an early call to the BBC Introducing Stage and catch them on Friday at 12.45 ?

Dead Inside Your Heart by Deep Cut

Lovely sounds and wicked vocals from Emma Flint, a band to watch out for!!!