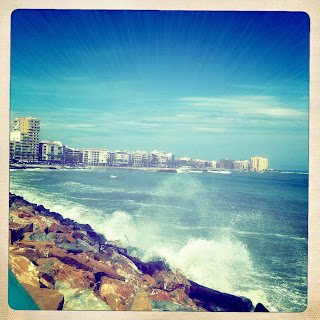 If you happened to be listening to BBC6 Music yesterday evening and in particular the Now Playing show, you may have noticed that some of the new music recommendations on one of the two guest blogger spots came from Breaking More Waves (the other was from the exceptionally good A New Band A Day). If you missed it, then for the next seven days you can listen again by visiting the BBC6 Music Now Playing website and hear our choices. If you don't want to listen to the whole show (you really should) the Breaking More Waves slot is on from around the 19.45 mark. You can also read the special piece that we’ve put together for the shows own blog entitled How The Internet Is Slowing Change In Pop Music.

The Breaking More Waves recommended artists were the sexy dark synthtopia of Curxes, the brassy playfulness of Rizzle Kicks, both of whom have been featured a number of times here. Our lead choice was a song that we considered to most fully represent this blog – the soft, subtle pop of Alice Jemima. You can find the tune played -a demo called Red Coat -here. Today on the Saturday Surf we’re featuring another of Alice’s songs – Psychedelic Bacon, which she entered into Radio 1 DJ and Bestival curator Rob Da Bank’s Song In Seven Hours competition and came out victorious, bagging 2 Bestival tickets. So now Alice will have the opportunity to see the Breaking More Waves alt-ego DJ collective The Sunday Best Forum Allstars when we whack out some tunes at the festival in the 10,000 capacity Big Top on the opening Thursday night. More of that later this year, but for now here’s Alice, this year a Bestival punter, but come on Mr Da Bank - how about at least a bandstand booking for her next year?

As is customary on a Saturday, having surfed the waves of the internet all week, we pick a small number of tracks that didn’t quite get a full blog post treatment this time round but are still most firmly endorsed for your listening pleasure. This week, there are just two pieces of aural splendour.

There was a time, before the ecstasy laden second summer of love when indie kids didn’t dance. To be ‘indie’ invariably involved skulking round in a darkened room, having your ears annihilated by a fuzzy guitar and moaning wailing vocals that sunk below the mists of feedback. Yet now ‘indie,’ is a genre that’s bandied around in the same way that music bloggers declare that the track they’re posting today is the best thing they’ve heard all year – it has become almost meaningless. So reluctantly we describe Nightbox as indie-dance. But forget genres and simply enjoy this Canadian five-piece’s romp of rhythmic make-your-way-to-the-dancefloor goodness. It’s called Pyramid. If you're in the UK you can catch them at Reading and Leeds festivals.

Our final track comes from Ghost Estates, a group from Dublin, Ireland who formed in 2010 from the remnants of SickBoy and 8Ball. After one year of writing and recording they have emerged with a self-produced 11 track album mixed by Marc Carolan, who has worked with the likes of Muse and The Cure. There’s some XX style guitar here, some Delphic style vocals there and even some saxophone, an instrument that after a lengthy lay off appears to be making resurgence in pop music with everyone from Lady Ga Ga to Dog Is Dead incorporating it in their songs.