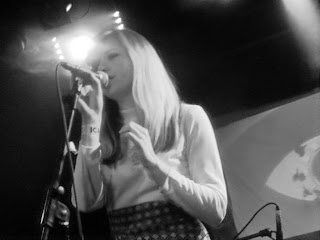 The word cuckoo applies itself to a surprisingly large number of resplendent songs. I’m A Cuckoo by Belle and Sebastian, Cuckoo by Curve (anybody remember them?) and even Marina and the Diamonds got in on the act yelping the word on Mowgli’s Road. Now here’s another to add to the list. Still Corners was a band that soundtracked the slow drift from the golden rays of summer to the more muted browns of autumn for us last year with a number of posts on the blog. Since then things have been a little quiet but the group have been busy getting themselves a proper record deal with Sub Pop (who have also signed Memoryhouse, another band that formed part of that soundtrack) and preparing a new album entitled Creatures of an Hour, which they will be releasing later this year.

Cuckoo, the first single from the album, follows on from where Still Corners left off – that is to say it’s dreamy, hushed and idly beautiful – the kind of music that drifts rather than punches – and that’s fine by us. There’s no official stream or video of the song right now, but this live version is certainly more than adequate.