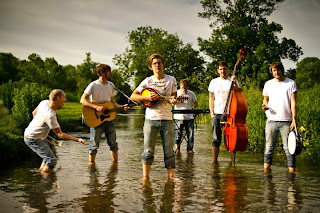 Blame Edwina Currie and her salmonella scaremongering a few years ago, but eggs have received some pretty poor press in the last few years. So here’s some good news for all you egg lovers. First a recent report in the International Journal of Food Sciences and Nutrition has stated that one of the benefits of eggs is that they make you feel fuller for longer and can prevent snacking. Second and probably more important for readers of this blog is that those fifty-egg-munching-town-and-country-scamps The Retrospective Soundtrack Players have released a new video for their song Real Cool Hand and yes, there’s plenty of egg gulping in the scenes. You can also see some pictures of those at RSP gigs who have taken up the bands fifty egg challenges here.

The band have recently put out their debut album Cool Hand Luke and following gigs with the likes of Frank Turner, Beans On Toast and My First Tooth are due to support The Walkmen in their (and Breaking More Waves) home town of Portsmouth at the end of the month before marching on to the 2000 Trees Festival in July.