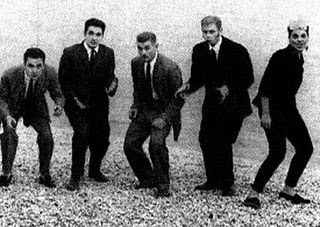 I met my first real love through music. This should come as no surprise.

Not much happened in Fleet, Hampshire where I was living at the time. This was pleasant middle class suburbia, just a short train ride from London, where the biggest thrill came from phoning the local fast food takeaway shop and lusting at the sexy intonation of the girl who always picked up the phone. Even this moment of excitement was killed once you’d picked up your order though.

So when local band Jim Jiminee started getting played on Radio 1 it was the most exciting thing that had happened in years. Their gigs at local pubs and the town football team’s clubhouse were sweaty, out of control things where the band mixed it up with a blend of soul, pop, skiffle and indie with songs about dole life and wanting to work. They felt like being on the edge of something, a ground swell of exhilaration.

Sometimes I’d go to the shows alone, other times with friends, and it was at one of these gigs where somebody who I worked with brought along a pretty, delicate and incredibly attractive girl. Everything about her seemed perfect, particularly the way she seemed utterly composed in amongst the chaos of the gig. We talked a lot that evening, sensing something between us, although she had a boyfriend. A few days later she invited me to another concert in London with her. It was obvious that even if she had been single she was out of my league. She was too attractive, too stylish, too intelligent and attended northern-soul clubs that I’d never even heard of. She was a cool heavenly dream. Her boyfriend was also incredibly good looking and immaculately dressed, although it did seem that he was a little dull. At the gig in London the two of us found ourselves chatting the whole time as if we’d known each other forever whilst he just stood there looking vacant.

A few weeks on and I heard through the grapevine that they’d split up. A day later we met up again at another Jim Jiminee gig. Nothing happened that night, but you could sense it in the air. There was a buzz of electricity running between us, chemicals rushing in all directions. I was trying to keep my nerve and not spoil things; the band made a welcome diversion for my brain that was sprawling and pounding with impulse. A few weeks later and we were together.

Jim Jiminee never made the pop charts; they’re now largely forgotten. You never hear their songs played on the radio; nobody quotes them as an influence and you certainly can’t kind find their music in the shops, on iTunes or on Spotify. But although they may not have left much of a legacy, they performed an important part of my life; as an audience member I felt part of their gang and more importantly they were responsible for meeting my first adult love. Songs such as Town & Country Blues, I Wanna Work and Do It On Thursday are all remembered fondly by me, but the track that stands out was a song from their debut album Welcome to Hawaii called Hey Day, which captures the clattering spirit of the bands gigs and the frenetic energy of falling in love for the first time perfectly.

Email ThisBlogThis!Share to TwitterShare to FacebookShare to Pinterest
Labels: Jim Jiminee, Music That Made Me