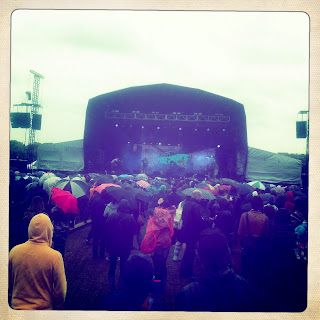 Welcome to the British summer festival season. We’ll be bringing a number of reviews of festivals over the next few months, focussing not just on the music, but all the other stuff that makes the event life-changing or soul-destroying or everything in between. We start with our review of Get Loaded in the Park which happened yesterday. As you can see from the picture above it wasn't the brightest of affairs weather wise.

Tickets for Get Loaded in the Park were £35 + booking fee – early birds at slightly cheaper prices were also available.

A disagreeably damp, grey, cold and showery day, but things never got horrendously muddy and there were no tents to be flooded out, as the event is only one day long.

Functional rather than pretty. A fenced off section of Clapham Common hosting all the basic requirements for an event such as this – main outdoor stage, 2 smaller big top style stages, a few food stalls, a few funfair rides and two large bars and that’s about your lot.

Rather like the site, functional rather than pretty, in the main. The vast majority of those there were 18-20 something indie kids, togged up in tent like ponchos, macs and boots. Full marks to those who still endeavoured to appear cool even although the reality was that they looked like imbeciles dressed in their straw hats and shades. They may as well have worn a sign stating 'twat' on their back.

Bog (bad joke) standard plastic portaloos and urinal clusters in one central hub at the rear of the site. They seemed to do the job though and the queues were never significant.

The only real queuing seemed to be for the food stalls at peak times. The site had plenty of room and we think the organisers should have considered a few more of these perhaps ?

We didn’t really spot any major mishaps. The stages ran reasonably to time, although some sets were cut short due to bands not being given enough time to set up. There was plenty of space on site for flows of pedestrian traffic. Security was present although not overbearing, bag searches were mandatory on the way in. The two big top stages were not clearly identifiable on the outside and could have done with a sign post saying which was which, but this is a minor criticism. The sound on the main stage was below par compared with other festivals, but the organisers had to cope with poor weather conditions and strict licensing rules from the local authority which are more strenuous than some other areas as Get Loaded is set in a residential area.

Hardly inspiring, but neither was it poor. The range of stalls included Chinese, Mexican, toasties and various burger / steak outlets. We felt particularly sorry for the ice cream man. With the weather as it was this really wasn’t going to be his day.

A little more downbeat than many festivals due to the rain and the event taking place on a Sunday, but as the beers were drunk and the music lifted spirits Get Loaded finally got into a bit of a swing, albeit a relatively sedate one.

Rather like the weather at UK music festivals, the music was a lottery. Whilst we avoided headliners Razorlight, the main stage sound meant that bands such as British Sea Power who we’ve seen play ludicrously good and sonically dismembering shows came across as rather underwhelming. Yet elsewhere underdogs such as O Children were desolately vast and majestically gloomy with their take on the classic goth template, even if their giant of a lead singer Tobi O’Kandi was wearing a white cardigan. Other fashion moments of note included Fred Macphearson of rabble rousing newcomers Spector sporting a fine pair of thick rimmed glasses as his band played a set of powerful indie pop tunes that ensured that they remain in the one to watch drawer. Immediately before them Alpines powerful pounding melodrama showed that their Bat For Lashes meets Zola Jesus atmospherics worked just as well in the daytime as it could at night plus lead singer Catherine received extra fashion points for wearing an Indian headdress. The highlight of the day however was French cute electropop trio Yelle (streaming below). “Are you ready to shake your ass for real now?” the group asked, and the crowd obliged with the bands red catsuited lead singer bringing infectious enthusiasm, energetic dancing and cowbell to the bouncing audience. It was the one moment when it really felt like summer had arrived.

With a 9pm curfew, the poor weather and a mixed bag in terms of musical quality this one day event was never going to match up to the experience of summer togetherness that the best music festivals can offer. Yet for a diverting attraction that doesn’t require too much effort on behalf of those attending, it’s a better way to spend a wet Sunday than watching telly or going to B & Q.