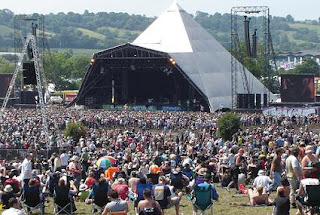 It probably hasn’t escaped your attention, and if it has it won’t do for much longer, that from this Wednesday the mother of all music festivals – Glastonbury – will open its gates again. Media over exposure will soon commence.

Writing a preview of Glastonbury is akin to trying to summarise War & Peace in a 140 character tweet on twitter. The size and scale of the festival is impossibly huge; the numbers of people that attend are equivalent to the totality of Breaking More Waves home city of Portsmouth debunking to a farm in Somerset and setting up a village of canvas. Glastonbury is super-enormous.

It’s because of its huge scale that a short blog post simply can’t cover everything that Glastonbury has to offer. With over 50 stages and 1000’s of performers everyone’s Glastonbury will be very different, but one thing is assured; no matter how much rain, mud, sunburn, or hot spiced cider induced hangovers you incur, Glastonbury will leave you with more memories, more moments of life affirming goodness than you could ever have just going to gigs and concerts.

“Leave the Wellington boots on the farm and try espadrilles, flip-flops or deck shoes,” was just one appalling piece of advice recently given by a Daily Telegraph journalist in his recently published Top Ten Festival Tips article. In response to this, rather than attempt to give a complete summary of the Glastonbury festival below you’ll find Breaking More Waves top tips for making Glastonbury one of the best experiences of your life. However if you want the ultimate guide, filled with loads of useful information and brilliant photos that capture every aspect of the festival why not go to Glasto Earth website. They even have pictures of every campsite to give you an idea of how quickly they fill up and the good and bad features of each. Like the festival itself you won't take it all in but the advice and facts it gives is the best out there.

1. For most festivals Breaking More Waves would always suggest the approach of organising your timetable in advance in order to get your best value for money and seeing as many bands as you can. However the 1,100 acres of Glastonbury means that running between stages in five minutes is just not feasible. The crowds and the endless distractions mean that exact planning is nigh on impossible. If the site gets muddy things take even longer. For this reason the best way to do Glastonbury is to pick two or three ‘must sees’ each day and then just let the festival take care of the rest. There’s always something unexpected, often hilarious, waiting to greet you round the corner – and it won't necessarily be music.

2. Get there early and camp high. Inevitably the biggest queues to get in are on the day that gates open (Wednesday) but it’s worth enduring them to secure a decent spot. If there are heavy rains common sense says that camping at the bottom of a valley is risky. And despite what the Telegraph says always take appropriate footwear - it doesn't take a lot of rain to make the main roadways and access points a bit messy as the video below (shot last weekend) shows. As the commentator says "There's some prime mud here." Hopefully there will be good weather as the week progresses, but even so go prepared as there's always a chance of rain.

3.Without wanting to sound like your mother or father and as organisers suggest, a field of tens of 1000’s of people is not the place to start experimenting with drugs. If things go wrong the results could be disastrous. The best Glastonbury we’ve ever been to was when we were on a very strict budget and didn’t even drink a pint of cider all weekend. The myth that you have to get mashed up is just a myth – providing you’re prepared to leave your preconceived ideas at the gates and be open to experience.

4.We’re now going to contradict ourselves and recommend that whilst you’re at Glastonbury you drink some cider – nothing out of a can though – try the Cider Bus, but beware it’s very easy to become one of the famous ‘cider bus casualties’ who can be found lying around vicinity of the bus looking somewhat worse for wear. You could even play cider traffic lights. One thing that makes Glastonbury different from every other large festival is that once you're through the gates there's no fenced off arena area, meaning that you can take your own drinks with you and take them round with you all day - no sneaking a hidden can of lager in required.

5. It’s inevitable that at Glastonbury, like any other festival, crime and in particular tent theft exists. Protect yourself by not bringing anything you can’t afford to lose, spread your possessions around your tent as messily as possible to make it harder for thieves and when you go to bed make sure you put all your valuables such as cash, mobile phone etc. in your sleeping bag with you. Don’t lie awake at night in fear though – despite what the press lead you to believe, for an event of this magnitude crime rates are still very low.

6. Go and see some new music – something you’ve never heard of. The main stages are fine for satisfying those ‘must sees’ but some of the best Glastonbury moments can be found stumbling across something unknown. This year Breaking More Waves was involved in the Glastonbury Emerging Talent Competition and all of the finalists in the competition have secured slots at the festival. Our personal favourite was Emily and the Woods who will play the Acoustic Stage at 4pm on Saturday. A live recording of her song streams below. The BBC Introducing stage also features a number of new artists that Breaking More Waves has featured in the last year or two including the taught robotic beats and guitar moodiness of Worship and the dark electropop of The Good Natured who also streams below.

Old House (Live) by Emily and The Woods

7. On the subject of new music, one must visit tent is Chai Wallah’s “Where all good things come together.” Have a look at the video below, it explains better than words the vibe of the place and this year has a brilliantly eclectic but enjoyable selection of music from the likes of rising star and Breaking More Waves featured Ed Sheeran who is possibly the busiest man at Glastonbury, playing what seems like almost every small stage on the site, to the funky brassy summer grooves of Smerins Anti-Social Club.

8. Another contradiction – besides some new music make sure you catch at least one big act on the Pyramid Stage. Hell, you’ve paid nearly £200 for your ticket so make your money worthwhile. It could possibly be the only chance you’ll get to see U2, Beyonce or Paul Simon so why not try at least one of them? There’s still something pretty special about standing in a field with about 90,000 other people and feeling that mass sense of belonging.
9. If you are going to enter the full hippy ideal of free love and nakedness at Glastonbury then we suggest that such amorous encounters happen as early as possible in the long-weekend, as let's face it, personal hygiene goes out of the window after a couple of days and waking up with a smelly, stinky, crusty cider-breathed dust or mud coated naked stranger may not be the highlight you were looking for. As for the nakedness, our money is on somebody getting into the spirit and taking their clothes off at the Spirit of '71 stage quite early on Friday.


10. Finally, have a great time. Glastonbury really is one of those ‘must do at least once in your life’ experiences. This will be Breaking More Waves sixth. It’s a cliché but it really is true there’s something very special, verging on spiritual about Glastonbury, providing it isn't horrendously muddy. Prepare to be moved.