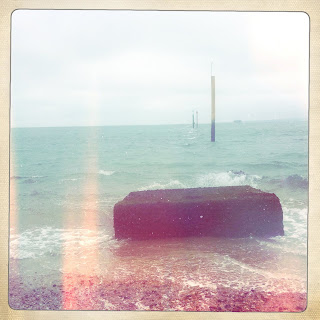 Take a ‘semi-ironic’ hipstamatic photo of the sea / waves / beach / surf (we’ve yet to feature girls in their swimwear – possibly the most chosen photo of any ‘cool’ blog out there), a little bit of text and a handful of tracks that didn’t quite make it onto the blog this week and what have you got? Yes, it’s Breaking More Waves Saturday Surf, a fundamentally lazy blog post. So without further ado, here are a small handful of songs that we didn’t want to get swept away in the on-going tide of incoming new music and so are bundling together in one buy one get three free posting at the end of the week.

How many times have we posted about Rizzle Kicks on the blog? Six actually. So let’s make it seven with this choppy and banging re-invention of Down with the Trumpets by Star Slinger. “If you feel like embedding it on your blog that would be wickedddd,” state Sylvester and Rizzle on their very own blog. Consider it done boys.

Down With The Trumpets (Star Slinger Remix) by Rizzle Kicks

Next is electronic pop chanteuse Florrie, who has written a fascinating blog post on how she funds what she does. It’s great to read an artist being so open about how and where the money comes from and is lost; for instance Florrie reveals that she loses approximately £450 for every gig she plays, yet still makes more money than she loses, mainly from synchronization rights. Taken from her new 6 track EP Experiments which is released on June 14, this song Experimenting with Rugs is probably the best thing she’s done so far. There’s also an incredibly stylish video for the song which you can see here.

Experimenting With Rugs by Florrie

For your further consideration, here's some synth pop that sounds like it's 100% designed for a Kitsune compilation. Sleepy Age, a three piece from New Zealand, fall just on the right side of seaside pier gaudiness with this song Decor, which has enough infectious synth riffs to accompany the hooky fantasy line of "girls look better in your head than they do in your bed."

Finally meet Ronika, from Nottingham, who is bringing back electronic-disco flavours last heard back in the mid-80’s – the influences seem to be debut album Madonna and even more specifically the song Who Found Who by Jellybean featuring Elisa Fiorillo – now there’s a classic we haven’t played for a few years. The track we're streaming Forget Yourself is her new single and is released on Monday. Right we’re off to dig out our old Shalamar LP’s.

Ronika - Forget Yourself
Posted by Breaking More Waves Blog at 08:30