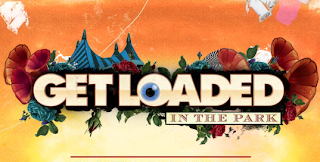 To the casual observer and at the risk of massive over generalisation, unless you’re the sort who got into ‘indie’ a few years back and sticks to the idea that skinny jeans, Top Man check shirts and slightly over styled spiked hair are the best look ever, the chances are that you’ll have not even considered the idea of grabbing yourself a ticket for Get Loaded in the Park 2011, on 12th June. With the likes of Razorlight, The Cribs, and The Rifles all featuring prominently on the bill it’s a wonder that The Kooks and The Enemy aren’t playing as well. Get Loaded in the Park 2011 could have been titled ‘Now That’s What I Call Landfill Indie 2004-6’, but thankfully a more detailed examination of the line-up reveals a broader brush stroke of bands, including a number of Breaking More Waves approved new acts.

The name Get Loaded in the Park is somewhat misleading. Those expecting a debauched day of getting off your face and rock ‘n’ roll excess into the early hours of the morning will be severely disappointed. “There is a zero tolerance to drugs at Get Loaded in the Park. Offenders will be handed over to the police and drug dealers will be prosecuted,” warns the event website.

Furthermore because of the residential areas that front onto the park the whole one day shebang is only licenced till 9pm, meaning that those who plan to spend all night raving, will have to do it elsewhere.

Then there’s the sound levels themselves. The website explains “Lambeth Council set licensing conditions which include music sound levels. These are not the best in the world. The organisers do everything in their power to maximise the situation by employing the best PA companies and noise consultants. Added to the set levels, other influences such as atmospheric conditions and wind conditions can make it extremely difficult to get the high music sound levels that some may expect. Should the levels not be to your liking, we can only apologise and rest assured that we have the best people working on it. However, we are restrained by conditions set on us by the Council.”

But let’s ignore the fact that Get Loaded in the Park operates under these strict licencing restrictions. Let’s also ignore the fact that the event often falls somewhere between an extended gig and a mini-festival, therefore feeling somewhat more of a compromise than anything of eminence. Instead let’s concentrate on the music. Because if you ignore the likes of Razorlight and The Rifles there are still a number of smaller and newer acts worth catching. Here are some our suggestions.

Whilst Flynn hasn’t found the chart-bound commercial success that his peer group of Mumford & Sons, Marling and Noah and the Whale have, his rousing rootsy songs are nonetheless delightful, displaying all the trademarks of a very gifted songwriter. If it’s a choice between this Johnny and the other one named Borrell on the main stage, take this one as our recommendation.

Alpines have cropped up regularly on Breaking More Waves since last October and the night-pop duo are gearing up for a busy summer of festivals following their recent appearance at Brighton’s Great Escape where we caught their late night beat-heavy intensity. Lead singer Catherine is the central focus – prowling the stage like a fierce combination of Fever Ray, Lykke Li and Florence and the Machine, her voice a booming dark force that will demand your attention.

Featuring Alexis Taylor of Hot Chip amongst their number, About Group take an unorthodox approach to recording their material, with much of their songs being formed through improvisation. If that all sounds a little jazz-wanky and self-indulgent, fear not because the results are subtly impressive – the songs on the album Start and Complete being pleasantly subdued and showing a very different side to Taylor’s day job. Catch them on a smaller stage than you'd see Hot Chip on these days.

In amongst the landfill you’ll find something brighter, angrier and way more dramatic. Los Campesinos! may have started with the twee-indie shouty vocal label hung crucifix like from their backs, but they’ve now evolved into something rawer, darker and substantially more powerful. Awkward and yet oddly celebratory Los Campesinos! is a band chock full with ideas that they manage to translate into passionate live performance. Side-step the lesser bands that occupy much of the main stage’s content and catch this lot instead. Here's an oldie.

We Are Beautiful, We Are Doomed by Los Campesinos!

We first mentioned Spector in a Saturday Surf a while back, where we described them as ‘a crooning pop extravaganza’. Since then the Guardian’s New Band Of The Day featured them and stated that ‘they have plenty to recommend, not least a frontman who has pretensions towards the foppish literacy of a Jarvis and musicians striving to frame those lyrics in a suitably epic context,’ which to our mind sounds, like a Mr Kipling cake, exceedingly good. If their debut single – Never Fade Away – is anything to go by, then Spector should be one of your top new bands to see at Get Loaded.