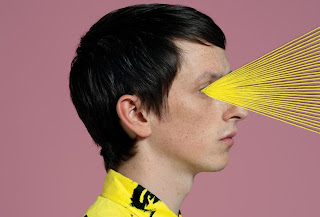 The last (and up and till now only) time that Totally Enormous Extinct Dinosaurs was mentioned on Breaking More Waves was way back in February 2010 when we saw him play at some weird little afternoon rave. We shamefacedly admit that this lack of coverage is totally sinful and to make amends we’re posting right now the oddball video for his new single Trouble, a track which has the same lolloping grooves that the likes of Hot Chip and Caribou do so well.

Unlike many Apple Mac knob-twiddling dance geeks T-E-E-D delivers a proper one man laptop-keyboard-sampler-drum machine show, complete with elaborate headdress and bounding energy; like a Howard Jones or Moby for rave kids of today. He’s out to play all this summer, at the likes of Beach Break Live, Glastonbury, Lounge On The Farm, Wakestock and Bestival so let him put some summery goodness in your dancing feet if you’re attending. The single comes with a bag of remixes from the likes of Jamie Jones, Chad Valley and one from Lapalux who gives the track a bubbly, disjointed makeover – we’re streaming that one below as well.

'Lolloping' is a word that I feel is often sadly underused... nice to see it get an airing.