Emily & The Woods - Eye To Eye 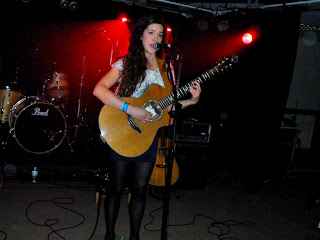 To a certain extent we agree with what Creney says, although with some reservations. Read on.

We’d agree that there are too many writers out there at the moment producing verbal wordy diarrhoea describing how the music sounds and its reference points; it has become writing churned out from the factory school of sameness. These pieces of journalism often become rather dull to read and smack of an author trying to score points about his / her vast musical knowledge, even although the reality is they are probably just trying to help their readers get a feel for the music. However, sometimes, as a one of the comments on the Collapse Board article from someone called Charlotte suggests “I actually like to read articles that describe the music – its quicker to read a review than listen to a whole album, and some text telling me about what I might hear is useful.”

So, here’s our view. It’s about balance. The best modern writing not only informs but entertains and excites. Sure, any monkey with a thesaurus and a bit of time on their hands can sit and dream up elaborate prose that actually says very little; something that could have been said in a sentence. Websites like Pitchfork have a lot to answer for in their influence of modern journalism / criticism both professional and amateur, and we're not certain it's all for the best.

So we come to Emily and the Woods. Her music is acoustic folk, although sometimes it has a jazzy tinge to it as well. A reference would be Laura Marling. That is all you really need to know. Now press play.

What is important is how music makes us feel. So let’s explain. If the music of Emily and the Woods were a real living breathing thing (and it’s not far off) we would marry it instantly and probably spend the rest of our time trying to make babies. This is a feeling called L.O.V.E. There’s something about her work that creates spine-tingling sensations. This is beauty. It gets you inside. This is why we adore music. Why don’t you fall head over heels for it too?

Eye to Eye is the title track from Emily’s new EP. We have previously featured the video for another song from the EP Steal His Heart. Emily plays the acoustic stage at Glastonbury this weekend. You can buy the EP here.

Eye To Eye by Emily and The Woods
Posted by Breaking More Waves Blog at 20:30

Email ThisBlogThis!Share to TwitterShare to FacebookShare to Pinterest
Labels: Discussions, Emily and the Woods

Hey Breaking More Waves!
What a great post! I just came across your music blog and I fell in love with it! It's spectacular!! Check out my indie music blog and follow if you like it! http://kaylapitcher.blogspot.com ... See you soon, kisses!