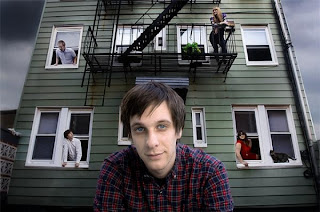 It’s an (unoriginal) thought that we return to often, but either the number of true creative types is drying up or there simply are very few new ideas left. Every note, every sound has been created before. Like cinema or theatre, pop music has now become an art form that can no longer makes radical strides forward, instead slowly evolving by rolling around in the muddied waters of the sea of influences. These days it’s not so much an equation of originality but the sum of the references that determines if a song is worthy of attention or not.

Which brings us to the subject of this new wave; Neighbors. We’re not talking about the people who live next door to us, nor some Kylie and Jason tribute band, but instead the vehicle for Brooklyn’s Noah Stitelman and his songwriting talents. Noah is assisted by four others - Evan Johnson, Brian Harney, Steph McParty and Anne Mino, and they make songs that may not be stunningly original (what is these days?) but have spot-on reference points. They've swam around enough in it all to create something just a tiny bit different – and these days that is really all you can ask for.

Listen to their best song Watergun and you’ll probably immediately think of a lighter version of The National in terms of Matt Berninger’s deadpan baritone vocals and melodic structure, but with musicianship that resembles OMD, Visage, or more recently James Yuill. Having worked with Kyle “Slick” Johnson (Modest Mouse, The Hives, Rogue Wave) Neighbors has created an odd mix, but it works. It really does. Elsewhere an older track Hooligans displays a weedier vocal that sits somewhere alongside Stephen ‘Tin Tin’ Duffy and Neil Tennant of the Pet Shop Boys but the music has a more muscular hazy-electro-indie flow to it. We could go on citing these reference points to describe the music, but let’s get real here; there’s nothing duller than a show off and in particular a music blog showing off an encyclopaedic knowledge of pop music reference points. You’ve probably switched off already and just pressed play below.

So the discovery of this band is down to you – and you may find you like them. As someone once said “That’s when good Neighbors become good friends.”

Many of Neighbors songs (including Watergun) are available for free download from the bands website which you can find here.

Email ThisBlogThis!Share to TwitterShare to FacebookShare to Pinterest
Labels: Neighbors

I'm loving watergun, we're gonna have it feature on our site. Thanks for sharing.