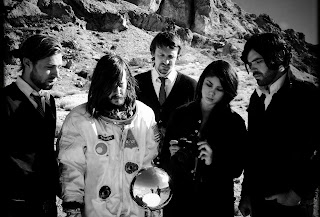 Back in April we wrote of Oklahoma orchestral folk masters Other Lives - we suspected that there would be many more posts about the band. Now let’s keep that promise.

Other Lives first UK single from their forthcoming brilliant end-to-end listen second album Tamer Animals is For 12. The song is a majestic slow motion gallop full of lush strings and ear caressing melodies evoking imagery of vast landscapes. It’s a tune that picks its way gracefully across the desert of musical averageness and forms its own little oasis; absorbing stuff of the highest quality.

This theme was part of the inspiration for the video as director Nick Davidge explains. “The first time I heard For 12 it really took my breath away, it was just such a beautifully haunting melody. It instantly started me thinking about these vast lonely landscapes and led to this idea of trying to visualize the most isolated human experiences, finding a situation that really captured the feeling of being utterly separated from humanity.”

Besides the release of this video, Other Lives have also announced some UK shows. The group will play 3 festivals – Summer Sundae, Green Man and End of the Road as well as dates in August at Manchester Deaf Institute and London Lexington.

Email ThisBlogThis!Share to TwitterShare to FacebookShare to Pinterest
Labels: Other Lives