Pris - The Better You Look The More You See (Video) 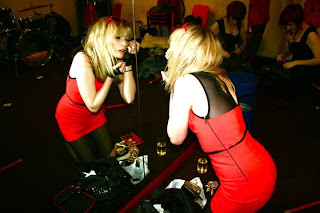 Richard Russell, founder of record label, XL Recordings, said in a recent interview with the Guardian that the sexualisation of female artists is “boring, crass and unoriginal.” He certainly has a point and the fact Adele, an artist on his label, has sold huge amounts of records without having to ‘sex up’ shows what it is possible to do.

But let’s be clear about this. From the starting rush of adolescence, to your first snog at the school disco, pop music has always partly been about sex; remember Elvis Presley thrusting his hips provocatively? Britney Spears in a red PVC catsuit? It’s always been there and probably always will. When you’re young, full of breathless hormones, your friends, looking good and getting f*cked are probably all you care about and pop stars are part of the fantasy. Of course, commentators are right to express their concerns about the influence of sexualised female pop stars and their affect on young impressionable teens and pre-teens. There’s a line to be drawn. But ultimate sexiness is not about revealing everything, it’s about suggestion, confidence and imagination.

Which brings us, for the second time today, to Pris – a sexy band. Pris are not sexy in a fake grinding-your-half-naked-arse like Rihanna manner, but in a confidence-verging-on-arrogance cool indie-punk way. They’ll no doubt get criticised for just being a sum of their reference points, but we reckon that they really wouldn’t care. Their cheeky-trashy couldn’t give a shit attitude feels surprisingly refreshing; we could quite imagine a good percentage of indie-punk teen boys (and girls) wanting to be in their gang – and, thank god, this is a band who look like a proper gang. Boring crass and unoriginal? Only if you’ve lost the will to live. Back in the early 90’s the Manic Street Preachers were criticised for ‘not being able to play’, the indie snobs just waiting for them to fail. Pris could well get the same sort of backlash – but judging by their tweets, they’ll be ready to take it on just as the Manics did. Sometimes there’s more to pop music than just pure musical quality, otherwise all we’d have are 100’s more Adele’s.

Earlier today we posted about the Pris involvement in Wangate and streamed their debut single – a foxy uh-huh-yeah Kenickie-esque puncher. Now the band have released a video – littered with their musical reference points we think it’s fair to say the probably don’t like Mumford and Sons, but do like The Clash and The Pixies. And how often do you see Birdland as a reference point these days? Now were Birdland ever sexy? Were The Pixies? Mumford & Sons? It’s all in the eye of the beholder.

As long as he kept his waistcoat on.

I don't know why you posted that version! :/ There's a better one here - http://www.youtube.com/watch?v=ysRi-Wodfeo

Hi Anon - We have already posted the alternative version elsewhere on the blog in our preview of Southseafest.