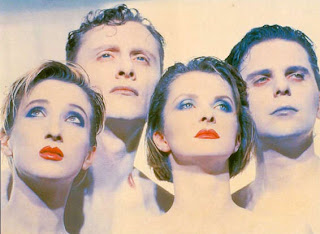 This choice in the series of Music That Made Me is not one, but two songs, but they are linked in a symbiotic relationship that demands that both are played together.

Propaganda’s A Secret Wish is one of the great (forgotten) avant-synthpop recordings of the 80’s, with Duel and Jewel forming important cornerstones of that record.

Once described as “Abba in hell” the two boys and two girls from Germany that were Propaganda made the very notion of two opposite couples true with this double edged song. On the A Side a light piece of hummable radio-friendly polished pop music, whilst on the B side a frantic and sexually tribal piece of percussive experimentation. Jewel was Duel’s evil cousin, formed from the very bones of its lighter half. Musical ying and yang if you like.

I first came across Propaganda on ‘youth’ music show The Tube on Channel 4 – essential viewing for any teenager with a passing interest in alternative pop music at the time. Probably 80% of the music I listened to then was British, with the only other European acts making a mark on my radar being Kraftwerk and Jean Michel Jarre. Propaganda prised the cracks open a little wider. A super cool art school band that weren’t afraid to recite Edgar Allen Poe on their track Dream Within A Dream and appear enigmatically elegant in their photo shoots. In this day and age they’d probably be considered pretentious and false, but in the 80’s when naïve glamour and intelligence was a commodity to be celebrated, they were brilliant.

My memories of Propaganda are not of another person, relationship, romance or friendship, but of a time. That time was sitting in my bedroom alone, full of all the insecurities and worries a teenager has doing schoolwork, reading books and losing myself in this crazy, industrial sounding pop music and wondering how on earth Propaganda had constructed it all. Yet that period has become timeless, with Jewel / Duel and the whole of the A Secret Wish album still being something that gets me 25 years on. Not just because of nostalgia, but because of something more primal. If you’ve never heard it before, listen in particular to the last minute and a half or so of Jewel – it’s warped mechanical crashes, bangs, yells and lush synth work sound like some sort of glorious chaos.

Email ThisBlogThis!Share to TwitterShare to FacebookShare to Pinterest
Labels: Music That Made Me, Propaganda

Yes! Yes! Yes! With extra delight - I was absolutely bowled over by Propaganda when they emerged in the mid-80s and this remains a favourite album and these two tracks especially. Loved listening to it on headphones as well with the sound skittering from ear to ear.

Glad I was not the only one who felt such an attachment to the period of time, the experiences, that this track evokes.

Also glad to see that these tracks are still remembered and not fully forgotten :)