Marina and the Diamonds - Ones To Watch 2009 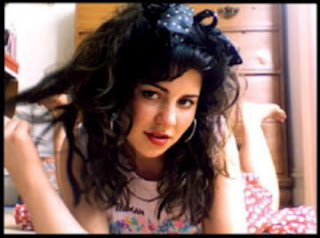 Breaking More Waves final one to watch for 2009 is Marina and the Diamonds. Blogged previously here, this maverick cat has already ruffled a few feathers with her blogs on Myspace, which she has now removed declaring that she is never opening her mouth again. These blogs ranted against various other female artists and celebrity culture. “I'm really sick, tired, depressed, uninspired by women," she wrote. "Vacant. Airbrushed. Empty. People. Getting. Paid. To talk. About fuck all. It's great that Eva Longoria looks hot in a bikini, but if the sun dies and the world plummets into darkness and ice, will anyone fucking care?" It seems that Marina has opinions, but has already decided that expressing them over the internet may not help her.

But enough of Marina’s rants, what about the music ? Well no doubt there will be comparisons with some of the artists that she ranted about on her blog as the industry looks for the next Allen / Nash or other female singer with her own mind who doesn’t conform to X Factor stereotypes. Her 6 track bedroom demo entitled Mermaid vs. Sailor showed some promise with its left of centre basic Regina Spektor meets Nina Hagen type leanings, particularly on the first two songs Seventeen and Horror Pop with its refrain of “You are a horror you are the same same same horoscope as me.” Since this demo her songs have evolved and improved and on February 14th Marina and the Diamonds will release their debut single Obsessions through a label that Breaking More Waves can’t get enough of at the moment - Neon Gold. The single has been produced with ex Sneaker Pimps man Liam Howe who has also written with Sophie Ellis-Bextor in the past, and with a deal signed Marina may well be on the way up.

Here is the video to the single.

Email ThisBlogThis!Share to TwitterShare to FacebookShare to Pinterest
Labels: Marina and the Diamonds, Ones To Watch 2009