Florence And The Machine - Ones To Watch 2009 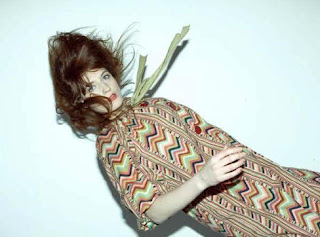 The typical first timer reaction after attending a Florence and the Machine gig tends to be “She’s stark raving bonkers.” This is because Florence Welch is a firework on stage. Once she is lit she explodes with a frenzy of primitive energy and ferocious colour, making her look like Nicola Roberts from Girls Aloud crazier sister. Past glories have seen her jumping fully clothed into a swimming pool at a gig at the South by South West Festival in Texas, play fighting with her keyboardist with attempts to rip the clothes off her, and stomping around stage with a lack of poise and co-ordination that is drunkenly refreshing. Combining this type of performance with an expressive bluesy shriek of a vocal far removed from her talking voice and small frame makes Florence and the Machine an exciting proposition.

Discovered by one of the Queens of Noise, Florence has busied herself in 2008 releasing two well received singles, Kiss With A Fist and Dog Days, both through Moshi Moshi and lighting that firework around stages in the UK. In 2009 things step up a gear with a debut album produced by James Ford of Simian Mobile Disco, who has previously worked with Klaxons and Arctic Monkeys. Florence has described the recording as sounding like "A choir, a harp, some metal chains and a piano all put through a car crusher, then hit with wooden planks really hard." There's also the new artist critics award at the Brits (won by Adele last year) which she is due to pick up. She will also be on the so called bottom of the bill ‘lucky’ slot on the NME tour which has previously been filled by bands such as Kaiser Chiefs, Coldplay, The Coral and Franz Ferdinand. However it’s also easy to forget that the slot has also been filled by Mumm- Ra and Fluffy, so the ‘lucky’ tag does not always ring true.

However in Florence’s case Breaking More Waves feels that Florence And The Machine are more likely to be a commercial success than a failure, such is the star quality of Florence herself, although that ‘bonkers’ tag may be a little too much for a wide mainstream audience.

Email ThisBlogThis!Share to TwitterShare to FacebookShare to Pinterest
Labels: Florence and the Machine, Ones To Watch 2009

The light that burns twice as bright lasts half as long.

Ones to Watch kist lol

Who are you? The BBC? lolol