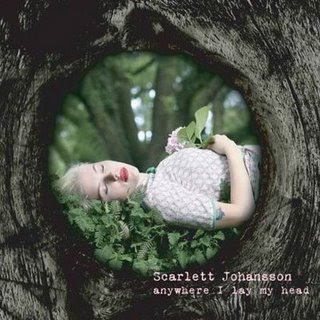 When Scarlett Johansson revealed that she was releasing an album, memories of other film stars turned rock singer nightmares rose up. The Dogstar project of Keanu Reeves anyone ? Bruce Willis doing Under the Boardwalk ? Ok, actress Juliette Lewis makes a fairly decent front woman with her band The Licks, but by and large Hollywood cool doesn’t translate well in the sonic spectrum.

Intrigue and indie credentials were added to the project with the news that Anywhere I Lay My Head would, with the exception of one self penned number, consist entirely of Tom Waits tunes and production duties had been accredited to Dave Sitek of TV On The Radio. Guest appearances with Jesus And The Mary Chain cemented the fact that Ms Johansson’s record had a strategy that was as credible and sophisticated as her best film Lost In Translation.

On release the album took very mixed reviews in the media and initially Breaking More Waves found it rather lacklustre, particularly Johansson's inexpressive vocal. However, Anywhere I Lay My Head had other ideas about itself, and was not going to sit idly at the back of the CD collection. Six months on and it sits justifiably in this list of Top Ten albums of 2008. It’s a real grower.

Johansson’s monotonous throaty alto voice may be limited but it gives the album a dark atmosphere which is then extended by the music. Full of shoe gazing droning, reverb, multi instrumentation and a backing of electronic wash, Sitek’s production has created sounds that give the recording a ghostly, hazy feel that works perfectly. There are distant backing vocals from David Bowie on the haunting Fannin Street and Nick Zinner of the Yeah Yeah Yeah’s adds guitar on a number of tracks to bolster the already impressive line up.

An impressive line up, and an impressive album that gets better with every listen. It may not be everyone’s cup of tea, but it quenches Breaking More Waves musical thirst nicely. Here’s the song Falling Down....