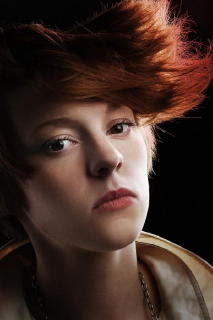 The first of two cyber disco ladies on Breaking More Waves one’s to watch list for 2009 is La Roux. Elfin faced Tilda Swinton lookalike Elly Jackson is big on the synths and big on the beats. But what sets her apart from a multitude of dance floor kids is a pop sensibility that knows how to deliver a half decent tune. With a big 80’s influence that draws from The Human League, Prince and Yazoo, combined with a more modern sound not that dissimilar to The Knife, her new single Quicksand out on the Kitsune label on Dec 15th shows plenty of promise. With a major label deal with Polydor in the bag and a support slot on the Lily Allen tour in March, La Roux can be expected to take her space age electro pop to the masses.

2009 may just be the year that the girls hit the dance floor hard and Breaking More Waves is predicting that La Roux will be one of the two girls leading the charge.

Email ThisBlogThis!Share to TwitterShare to FacebookShare to Pinterest
Labels: La Roux, Ones To Watch 2009