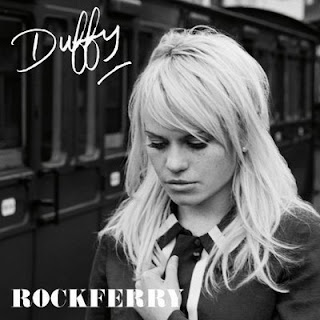 OK, if you are a regular visitor to Breaking More Waves you may well be cringing at the title of this blog. Yes, Breaking The Waves 9th favourite album of the year is Rockferry by Duffy.
The welsh songstress has sold bucket loads of albums this year, and her music was described in the press as an alternative to Dad Rock - yep, Mum Soul. Not the greatest title admittedly, and certainly Aimee Duffy is not producing cutting edge, inventive or original music. I’m sure many Radio 2 listening housewives have purchased Rockferry whilst shopping at Waitrose, and the music police will shoot them down for their actions. How can middle aged mums have such poor taste you may ask ? Is that what happens when you reach a certain age, does all quality control go out of the window? Well this middle aged dad is right with those mums and votes that Rockferry is really a rather good album, and that the quality control is working fine. I do not seek the approval of the music police. Sorry, I can’t help what I like, and sometimes my choices and arguments will contradict each other. Consistency is boring.
Essentially Rockferry is gorgeous piece of heavily produced retro sounding pop. Sure, there are a couple of songs that are just a little lacking in balls, and arguments remain about the authenticity of a girl who once appeared on the Welsh version of X Factor. But when Breaking More Waves leaves all prejudices aside and simply listens to the music with no preconceived ideas, there are some show stopping 60’s styled classic pop songs on this album. From the epic Distant Dreamer which is quite possibly the best song Bernard Butler has produced since Suede and the McAlmont and Butler projects, to the Lulu like hit single Mercy, with its “Yeah Yeah Yeah” chorus that gets deep inside your head (even if it was a little too similar to a certain Ms Winehouse’s “No, No,No,” refrain), this is a well constructed pop album that captures perfectly the sixties soul sound.
Sorry music police. I’m right, you’re wrong. Maybe thousands of middle aged housewives are right after all. But if you don’t agree maybe my No.8 choice will be more your cup of tea ? Here's why thousands love her.....and her performance on later with Jools.
Posted by Breaking More Waves Blog at 06:21

Email ThisBlogThis!Share to TwitterShare to FacebookShare to Pinterest
Labels: Best Albums Of 2008, Duffy

My thoughts exactly, just because an album is popular in the mainstream doesn't necessarily make it bad. Not sure this will feature in my top ten, but certainly there will be an honourable mention!