Skint and Demoralised - Ones To Watch 2009 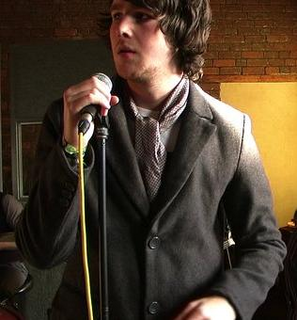 Breaking More Waves sixth One To Watch for 2009 is Matt Abbott aka Skint and Demoralised. Matt is a man who claims that on his Christmas list this year he would quite like Sarah Harding, Cheryl Tweedy, Nicola Roberts, Kimberley Walsh and Nadine Coyle. C’mon Matt, all five of Girls Aloud is just a little greedy don’t you think ? And besides you are probably a little too young for them, after all, you are still a teenager. Breaking More Waves would still quite like Nicola, if she is going spare, but then we are certainly too old for the red haired miserable one.

Much championed by Steve Lamacq, who named Skint and Demoralised as his third favourite new act of this year, and blogged by Breaking More Waves at the time of release of his debut single The Thrill Of Thirty Seconds, which sold out almost immediately, you can catch him on tour early in 2009. His music is a chirpy poppy blend of jangling guitars indie disco drums and northern soul reference points not dissimilar to The Smiths with dry spoken word vocals delivered in a dry Yorkshire tone. Despite Matt's slightly long haired laddish look, his extract from a diary poems are sweet in their nature and no doubt many young lass will fall for him. An album Love and Other Catastrophe’s is due to follow.

Email ThisBlogThis!Share to TwitterShare to FacebookShare to Pinterest
Labels: Ones To Watch 2009, Skint and Demoralised