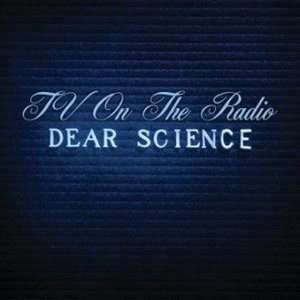 For many albums, the realisation of its greatness comes only after repeated listens. The subtle nuances, the deeper melodies and hidden joys that grow on you, over cheap pop thrills. Yet with TV On The Radio's Dear Science it takes just one listen to the opening track Halfway Home to know that this is going to be a great album. Heavy clattering war like drums punctuated with Beach Boys style “Ba Ba Ba” vocals propel the song forwards until a moment after exactly four minutes and twenty seconds Tunde Adebimpe sings softly “ Go on throw this stone, into this halfway home” and the song musically orgasms. The pace of the drums increases, squalling electric guitar crash over in waves, the bass suddenly drives home and the “Ba Ba Ba’s” become an almost chaotic mess. It leaves you feeling wasted, spent and totally exhilarated.

But one song does not make an album, and the New York quintet have with Dear Science produced an artistically complex album, where no two songs are the same but all are equally as good. It is a fully realised, often complex piece of work, loaded with giddy slightly sixth form political and cultural references. “Hey Jackboot, fuck your war. Cause I’m fat and I’m in love and no bombs are fallin’ on me for sure. But I’m scared to death that I’m livin’ a life not worth dying for,” Adebimpe sings on Red Dress hinting at many of the issues that the United States consciousness deals with in 2008.

Some have compared Dear Science to the work of Radiohead, but musically there are very few similarities. However what both bands do share here seems to be an ideology of making challenging artistic rock records that sit outside of the mainstream. In sound alone TV On The Radio sound more like Prince funking out at his best on Golden Age and a marching band singing about breaking beds and sucking skin on the climatic Lovers Day. And that’s the picture not even one twentieth painted.

The three best things about this album are first that despite its diversity of songs, its overall cohesiveness as an album works impressively. The second is that although it is in the main not an album of simple verses and catchy choruses, it is surprisingly instant to listen to, and yet remains addictive several months later. The third is that it is one of a very small number of albums on this list that is not a debut.

Whilst you would suspect that Breaking More Waves no.9 choice tomorrow will not feature in many critics end of year polls, Dear Science probably will, and I applaud anyone that shows faith in this exciting modern rock record. It neatly balances artistic intrigue with a sense of the commercial populist in the same way that, in the past, great American bands such as REM and Talking Heads have done.

Dancing Choose from Dear Science by TV On The Radio
Posted by Breaking More Waves Blog at 04:49

Email ThisBlogThis!Share to TwitterShare to FacebookShare to Pinterest
Labels: Best Albums Of 2008, TV On The Radio