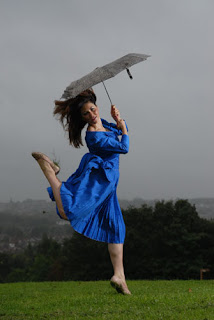 Marina and the Diamonds music fits perfectly in the top drawer of the Breaking More Waves treasure box. It’s quirky, cuckooing, kooky, female fronted slightly left of centre pop music with an earthy richness that is seductive. If Mr Kipling made bands this would be another one of his exceedingly good ones.
With Rosie Oddie and the Odd Squad, Florence and the Machine, and Cassie and the Cassettes to name just a few, there seems to be a growing trend of bands with strong female singers who use their own name to set themselves apart from the rest of the band and Marina and the Diamonds is another to add to this list. It certainly redresses the balance from the plethora of Razorpigeons and Liberkooks bands that have deluged the UK music scene with ever decreasing creative returns with over the last few years.
Marina’s very eighties styled operatic shriek and stomping tunes can be heard to good effect on the rather wonderful Girls Girls Girls, which frankly wouldn’t have sounded out of place as the UK entry for an early 80’s Eurovision song contest; it would have probably won the thing. With an opening line of “I look like a girl and think like a guy, not ladylike to behave like a slime,” you can tell that you are dealing with someone with plenty of metaphoric balls here; someone who has serious potential. Not all of her songs are upbeat epics though, with the piano led We’ve Got Obsessions having a similar style to a bedroom based Regina Spektor. But despite all these female references I‘ve just thrown in, don’t mention the Allen or Nash words to her. On Nash, Marina sarcastically says “Oops I have a vagina and a keyboard. We’re so similar!” and Allen “She was quite good until she wrecked it all by turning into everything she’s not,” citing Allen going on a diet, dying her hair slapper blonde and flashing her boobs as examples of where she thinks Allen has tripped up. So don’t expect to see Marina on the front page of Nuts if a deal and success comes her way. After all this is a girl who sings in the most ironic of ways “I love your Botox bitch, I’ll curtsey for you.”
Posted by Breaking More Waves Blog at 19:48

Marina is not a band.

"I am Marina, you are the Diamonds".

You've clarified this by now, but I just felt the need to say this, nonetheless.