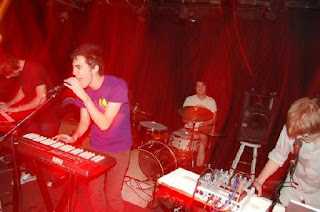 Although for the second year running Breaking More Waves finds a large number of its One’s To Watch on the BBC Sound Of 2009 List, Giantess are a band that have yet to crop up significantly on many people’s radar, particularly in the UK. In fact Giantess are so new that at this moment in time they only have 210 friends on their Myspace page and played only their second ever gig in November.

They are another one of the crop of bands that continues to thrust sexily out from Boston, Massachusetts, and will soon put out their debut single Deceptive Man on Neon Gold in the US.

The people at Neon Gold are putting out some of the coolest of records right now, including yesterdays darlings Passion Pit and one more of Breaking More Waves future One's To Watch, which we have not yet named. The band have also been recording their debut album which they have described as sounding like what would happen if C+C Music Factory high-fived Michael Jackson in midair, with less "ooh baby's" and more "hey ladies." Fantastic.
Giantess bring washes of epic synths and handclaps with retro 80’s attitude to an indie dance floor and make them sound cool again. They sound so now, so fruitily disco. This four piece strut their funky attitude with their killer tune Tuff ‘n Stuff, which sounds like a mash up of Cameo, Jean Michel Jarre and Chromeo, as their lead singer flirts “I just want to say that you’re beautiful, your looking incredible, girl your making everybody’s day.”

It’s very early days for this band, but Breaking More Waves reckons their My Space friend count may soon be on the way up.

Here is the only video of the band in action that seems to be available at this moment in time
Posted by Breaking More Waves Blog at 00:01

Email ThisBlogThis!Share to TwitterShare to FacebookShare to Pinterest
Labels: Ones To Watch 2009, Yes Giantess