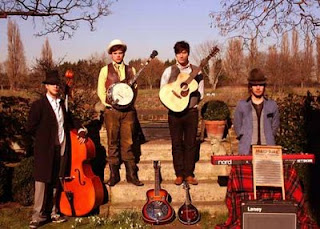 Mumford and Sons are the sound of American post war folk, bluegrass and country music with a certain timeless quality. Yet they are from London and it seems that their time is now.
Having shared the live stage with Laura Marling where members of the band have provided backing, the group are now stepping out on their own with a melancholy and mournful sound that comes fully formed and note perfect. With two singles released through the Chess Club label, it would seem a natural progression for this band to go onwards and upwards, and when an album is finally released it would be no surprise to see it on the Mercury Award nominations list. They are that kind of act.
Lead singer and multi instrumentalist Marcus Mumford has a raw tender almost broken feel to his voice, slightly reminiscent of Dave Mathews, which adds significant weight to the words he sings. On the fearful Roll Away Your Stone he croons “Don’t leave me alone at this time, for I am afraid of what I will discover inside,” and you cannot help but shudder with the thought of looming darkness. His voice is backed by pitch perfect four part harmonies which combine with a masculine togetherness to provide a soundtrack that almost pacifies their old time instruments such as banjo and double bass.
Mumford and Sons carry buckets of elegant rabble rousing soul that will warm you deep inside, and therefore easily find a place on Breaking More Waves One’s To Watch list for 2009. Here's the song White Blank Page.
Posted by Breaking More Waves Blog at 00:01

Email ThisBlogThis!Share to TwitterShare to FacebookShare to Pinterest
Labels: Mumford and Sons, Ones To Watch 2009